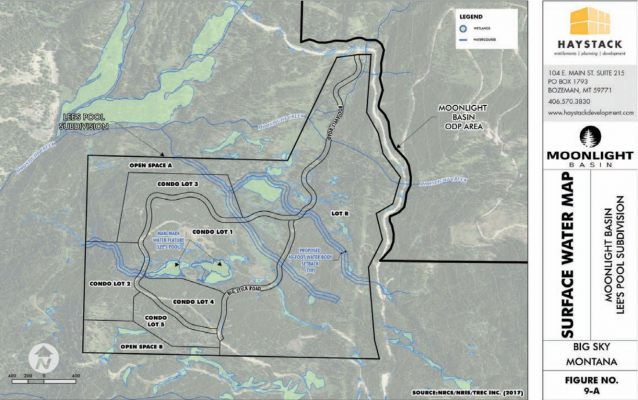 The Lee’s Pool Subdivision Public Hearing was originally scheduled Jan 29. The applicant, Moonlight Basin, requested to postpone this hearing to address topics in the staff report including a Geotech analysis, and resubmitted part eight of the preliminary plat which discussed a request for a stream construction setback reduction.

After the resubmittal, COVID-19 altered board operations and the public hearing was postponed until it could be conducted in-person, in alignment with Gov. Steve Bullock’s Phase Two of reopening Montana. The in-person hearing was held on Monday, June 29 with options to attend via WebEx or dial-in.

The Lee’s Pool Subdivision is proposed to have commercial elements including a hotel, a ski lodge, a spa, a restaurant and a parking area. Residential elements would include condo lots, cabins and family residences, totaling 96 hotel keys and 66 residential units.

Lee’s Pool would be serviced by existing facilities—water and wastewater treatment through Moonlight Basin Water and Sewer District and existing utilities offered within the site and along Jack Creek Road.

The intended access to Lee’s Pool is from Jack Creek Road via Lone Mountain and Moonlight Trail from the east (Big Sky) side. The staff report called for the pavement of this section of road to comply with Madison County Subdivision Regulations (MCSR), which the applicant recognized as the intention.

The main proposed road is referred to as Roosevelt Road which would loop around to connect with another road, Big Stick Road, to potentially provide alternate emergency access.

In terms of geological hazards, the original preliminary plat showed construction areas in orange and red Geotech areas. These were plotted as condo lot units to allow for flexibility of placement in the future. Site-specific Geotech will be performed, and the applicant assured the staff ’s conditions would be met regarding geological safety.

The key elements surrounding this preliminary plat included its status as a Planned Unit Development (PUD) and the request for a decreased construction setback near a waterway which impacted public health safety and protection of riparian resources, according to the board.

“The language in our regulations does provide opportunities through the PUD for somebody to modify or customize the applicable development standards for a particular proposal. That has been the avenue or the mechanism by which the applicant has requested the reduction,” Alex Hogle, planning director, said at the meeting.

If criteria are met, an applicant may use the PUD to request modifications, in this case, a construction setback reduction. The setback is in relation to an unnamed, perennial stream located in the ‘west meadow’ of the property.

The applicant asked for the 100-foot construction setback specified for perennial streams in the MCSR to be reduced to 40 feet, “in order to establish guest cabins on a forested area of higher ground between the ‘west’ and ‘east’ meadows,” Hogle said in the staff report.

“The streams and other water bodies are being preserved to a maximum extent possible. Impacts have been limited to road crossings and utilities only where absolutely necessary. No buildings or site grading will impact the streams or other water bodies,” the applicant stated in the preliminary plat.

The setback would allow for clustered development, which aims to preserve open space areas and promote efficiency, preservation and enhancement of those spaces. “The objective is to allow for thoughtful design practices in circumstances where functionality is maintained while observing a sensitivity to the site characteristics,” Hogle said in the staff report.

After going through a summary of the staff report and hearing from the applicant and others, the meeting was opened to public comment. Lynn Bacon, wildlife biologist and professional wetlands scientist and principal of TerraQuatic, LLC, pointed out that Montana Fish Wildlife & Parks did not approve of the 40-foot setback. “Clustering for me is not enough of a reason,” she said.

Paul Grigsby, attorney in Bozeman representing Dr. Howard and Brenda Sheridan who live along Jack Creek Road, expressed the importance of the wildlife corridor where construction was intended. “It’s just not appropriate in that area between the two wetlands, between the two meadows,” Grigsby said.

Grigsby asked the board to deny the request and address the shortcomings Bacon identified in her report, including a blanket 40-foot setback, and asked the applicant to delineate where buildings under 100 feet would be built.

“We did ask for a blanket 40-foot stream setback,” Kevin Germain, applicant on behalf of Moonlight, said. “The only area we need it is right here. It can be limited to this one area. It’s on the map and that’s the only area that we need a relaxation with the streamside setback is right in that general cluster.” He asked if the board denied the setback that the applicant be able to look into open spaces for development possibilities.

The board questioned why the cabins could not be moved back further from the stream to abide by the 100-foot setback in the MCSR. Moving the cabins back would encroach upon existing wetlands. The board also asked if these 13 cabins proposed near the unnamed stream were crucial to the development plan. Germain confirmed this, saying they were essential for a successful hotel operation.

Most board members did not approve of the reduced setback. The issue is complicated and much debate about unclear definitions and regulations that could be interpreted in multiple ways developed.

“Residents like Dr. Sheridan, who have lived in the canyon, and those residents that we heard from tonight—there are a lot of pieces to this puzzle. I don’t have the answer and I’m aware that the conversation has been going on a long time, but there are so many sides to the story. It’s not going to be answered in the subdivision review,” Hogle said.

The board went through 35 findings of fact and voted on whether to approve or not. The MSCR stream construction setback of 100 feet, as the board saw it, was imperative to protect the headwaters that flow into Moonlight and Jack Creek and ultimately the Madison River.

At ten minutes before 1 a.m., the planning board voted unanimously to disapprove of the 40-foot setback request. Laurie Schmidt pointed out in her 20 years of experience the board has never gone against the MCRS. The board did approve the preliminary plat as PUD. Moving forward, the board will forward their insight to the county commissioners within 10 days after the meeting. “We do not make any final decisions,” Darlene Tussing, board president, said.

The Madison County Board of Commissioners will decide whether or not to approve the setback informed by the findings of the planning board.