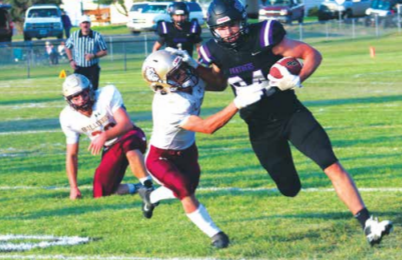 Being invited to compete in the Shrine game is a huge honor, said Batzler’s coach, Clay Pierson. Pierson described it as the biggest all-star game in the state.

“Making the roster means you are one of the top players,” said Coach Pierson. “Being a Class-C player and making it to this game is a huge accomplishment, and it will be fun to watch him compete with and against the best players in the state in a 11-man setting.”

Coach Pierson described Batzler as a versatile "do it all" athlete who excelled in any position he was handed. That included RB, QB, WR and TE, and that versatility, said Pierson, led to 2021 being one of the best seasons a Sheridan player has had in a long time.

According to the competition’s website, the Montana Shrine Game is the premier all-star game in Montana and has a long history of distinguished players and coaches. It is also one of the oldest high school all-star football games in America.

Every year since 1947, Montana high schools’ finest players are selected to compete in a game to raise money and to help make the public aware of the expert orthopedic and burn care available at the Shriners Hospital for Children in Spokane, Wash. Expert care is provided regardless of the family’s ability to pay.

In recent years, the Montana game is the top Shrine Game in the nation for hospital donations. In the last ten years this game has raised nearly $1,000,000. Forty of Montana’s finest are selected to compete on each team and two players from Canada will join them, one for the East and one for the West.

These players were nominated by their schools and coaches across the state, and finally selected as the “best of the best” to participate in the 75th Montana Shrine Game. They join an elite fraternity of players, many of whom have gone on to distinguished collegiate and professional careers.