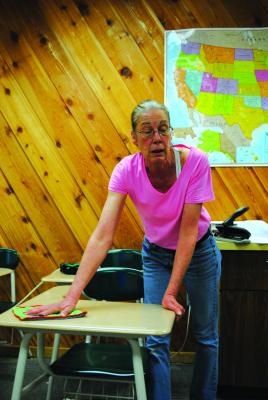 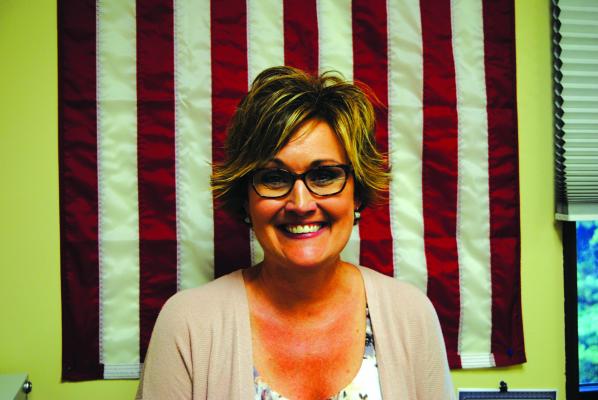 ENNIS – The Ennis School District’s custodial staff breathed a sigh of relief Wednesday evening, May 16, when the school board voted to continue working with them to find ways of reducing costs, rather than contract an outside firm to clean and care for the schools.

Superintendent Casey Klasna brought the issue to the board, noting that the district was always looking for ways to reduce expenses.

The district issued a bid notice for custodial work contracted outside the schools. Klasna told the board he’d talked to the custodial staff about this and said any time an expense exceeds $80,000, the district must put it out for a competitive bid.

The district received just one response, from Exec-U-Care Services, of Bozeman.

Opening the bid at the table and reviewing what was offered, Klasna shared the company’s offer of a specific list of services, each done a certain number of times per week, including dry and spot mopping and machine cleaning the school’s floors, wiping off counters, cleaning toilets and restrooms, emptying trash, wiping down sinks and the walls behind them, disinfecting desks and other work areas, cleaning furniture, disinfecting cafeteria chairs and tables, cleaning locker rooms and showers, cleaning and disinfecting the gym and double checking doors for security, among others.

Klasna noted that many non-school activities use school facilities, including Lions Club, 4-H, Womens Club and other community groups, and sometimes even for funerals. He and the board wondered if cleaning up after these events would be included in the contracted services.

The current janitorial staff costs the school district $242,000 per year, including wages, benefits, retirement, insurance and other items associated with directly employing personnel, Klasna said. This, the board calculated, was a bit more than $20,000 per month.

Klasna also noted that the district could reduce this $242,000 figure by $50,000 after a custodial staff member retired, bringing the total the district spends on custodial services to about $192,000, provided the position was not filled.

Custodial staff members were in the audience, and said they’d been worried about losing their jobs since the earlier discussion with Klasna.

During the meeting, custodian Claire Oliver told the board the custodial contract under consideration didn’t take into account many things the staff did without being asked.

This included having its own equipment and using its own materials, a benefit for taxpayers. She noted the current staff’s years of knowledge and their integrity – and concern – to take proper care of the school, something a contracted firm would lack.

She said the custodial staff takes care of a lot more than sweeping floors and cleaning showers at the school. She talked about how the staff sets up and cleans up after many non-school events, such as Lions Club meetings and funerals.

“We’re doing lots of things that don’t get noticed,” she said, for like changing out faucets when they get clogged. She also said that while an outsourced company might come in with a low bid now, their prices were likely to rise as time continued.

Oliver noted the school’s recently approved General Fund levy, approved by 770 district voters, and the consequential increase in school funding. “Where does the money for this go,” she asked, suggesting the district also charge a cleaning fee. She questioned why the district would even seek out a bid before negotiating with the employees.

“I’d give up holidays to have a job,” she said, recalling how 20 years ago, she’d worked three temporary jobs all summer to earn her keep, then barely had enough money to make house payments and other expenses during winter. She didn’t want to go back to that way of living, she said.

She said retirement benefits and insurances might be a potential bargaining chip.

The board tried to reassure the custodial staff that it was just looking for information, not nixing their jobs.

Board Chairman Kris Inman said the district was experiencing cuts to educational funding and they were just looking at the numbers.

Board Trustee Karen Ketchu said she appreciated the comments of the custodial staff, but said the board had to consider cuts everywhere, “…to teachers, to supplies, to projects… everything to achieve the best possible outcome for the schools. We are responsible to explore the options.”

Board Trustee Chad Coffman – in his final meeting as a trustee – urged the janitorial staff not to take the board’s search so personally. The board was obligated to find ways to cut expenses.

Klasna also reiterated the idea that the district was just exploring options and told the board that the school charges some users $200 per event for cleaning up facilities afterwards. Lions Club and similar groups are not charged, Klasna said, “because they do so much for the community.”

Board Trustee Julie Funston noted that if costs for non-covered event cleaning, janitorial supplies, etc. were added into the $15,000 per month contract figure, it would bump the overall cost up.

Coffman agreed, noting that without the fifth custodian on staff (the $50,000 savings), he felt the contract versus the existing staff was “a wash.” He said he couldn’t see the value of taking jobs away from people in the community when there were no significant savings to be had.

Board Trustee Andrew Henrich also agreed, saying he couldn’t see an “outstanding reason” to pursue the contract bid when there were many “fill-in-the-blank” numbers in it, and the school might save money with a four-person staff.

On a motion by Funston and Coffman to continue to work with the existing custodial staff and look at ways to reduce costs, the board unanimously shot down pursuing the contract.

In other business, the board:

• Approved the purchase of a $114,000 activity bus to replace a 1982 bus that had high mileage and was hard to get parts to fix. Transportation The new vehicle, a 40-passenger model, would get 8 miles per gallon (mpg), a 3 mpg savings from the 1982 model, would be easier to fix and would save money on items like tires. Funston balked at spending an extra $10,000 to paint the bus with special logos, but was told not doing this would be more expensive later. Other board members said athletic teams arriving to a game in a white bus would damage their pride, so the board approved the $114,000 package.

• Canvassed the levy election and accepted the results. Seating  new board member Jennifer Rohrback and acknowledging the 16-year service of Chad Coffman with appreciation and gifts.