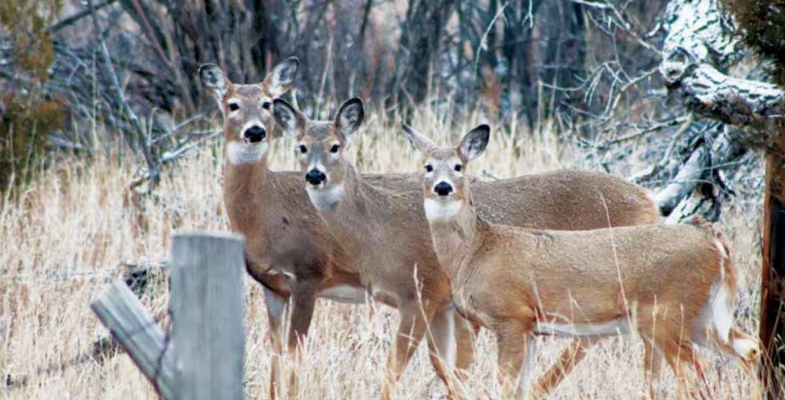 Effort aims to slow the spread of Chronic Wasting Disease

Starting Dec. 15 Southwest Montana hunters who ate their tags rather than their freshly harvested venison will have another opportunity to bag a white-tailed deer.

The extended hunt, which runs through Feb. 15, applies to unused 2020 either-sex general white-tailed deer licenses as well as antlerless B-licenses.

Citing the need to curb Chronic Wasting Disease, Montana Fish, Wildlife & Parks biologist, Dean Waltee, proposed the extension to the Montana Fish and Wildlife Commission on Dec. 10. The proposal was approved in its entirety.

The extension is a win-win-win for hunters, FWP biologists and ungulate populations, but it hinges on hunters participating in the sampling process.

Waltee said so far, he’s pleased with the turnout. “We’re seeing good hunter participation, as well as engaged landowners who want to know what’s going on on their property, by requiring folks allowed to hunt there to submit samples,” he said. “This has given us a better idea of the scope of special distribution of the disease.”

Following the approval, FW&P District 2 Commissioner Pat Byorth noted that while hunting extensions for white-tailed does are common, including bucks is not. “But bucks, especially during rut and even post-rut, travel long distances and can spread disease to winter ranges,” he said. “Right now, we have a high incidence of CWD, especially in the Ruby Valley, and the only way to get incidences down is to reduce population. Otherwise, we risk losing the white tail population and other ungulates as well.”

Byorth is a hunter, and since he managed to miss shots at bucks with both his bow and his rifle this season, he said he’s likely going to take advantage of the extension. “I would not be against heading to the Ruby Valley,” he said.

A look at the numbers

CWD testing is voluntary throughout Montana and can be done at a designated sampling station or via an online and mail-in process.

Between July 1 and Dec. 3, 2020 testing has detected 134 positive cases out of more than 7,000 samples, with newly detected cases in 5 districts. Three hundred and thirty-five samples were gathered in HD 322, which encompasses the lower Ruby Valley near Sheridan. As of early December, 78 of those samples tested positive.

CWD was first detected among white-tailed deer in the Ruby Valley in 2019, and as of late-November 2020 estimated prevalence of the disease in Southwest Montana hunting districts ranged from zero percent in HDs 324 and 325 to as high as 50% in a localized HD 322 where approximately 2,000 white tails are routinely counted by FWP in the spring green-up.

Time is of the essence when it comes to slowing the spread of CWD, which is well-documented in other parts of the United States.

Waltee said that research from other areas has shown that maintaining a low prevalence of the sickness in populations does not have a major impact on numbers, but once 20% or greater of a population falls ill, numbers begin to decline and will continue to do so without intervention.

“We need to be thinking long term,” said Waltee. “In Southwest Montana there is the chance that numbers get to levels that could reduce populations. We’re already there in the Ruby Valley.”

Since 2017, FWP has sampled 17,960 deer, elk and moose combined statewide, with 316 positives. There has been no documented spread from whitetailed deer to other ungulates in Southwest Montana. Waltee hopes that reducing current white tail numbers will prevent the spread to other species, including moose, whose numbers are already very small.

The science behind CWD

FWP provided some scientific background in a recent press release, explaining that CWD is a 100% fatal disease that infects members of the deer family, including elk, moose, mule and white-tailed deer.

CWD is not a virus, bacteria or fungus. It is caused by infectious, mis-folded proteins, called prions, that spread throughout the animal and result in organ damage and eventual death. The disease is slow acting, degenerative and always fatal. It takes about a year and a half for an animal to succumb to the disease.

The name comes from the appearance of symptomatic animals, which get very skinny and sick-looking before they die. There is no vaccine or cure for CWD.

There is no known transmission of CWD to humans, but the Centers for Disease Control and Prevention recommends that elk, deer and moose hunters in areas with known CWD presence should have their harvest tested for CWD and should not eat the meat if the animal tests positive.

More information on CWD can be found on MT FW&P’s website.