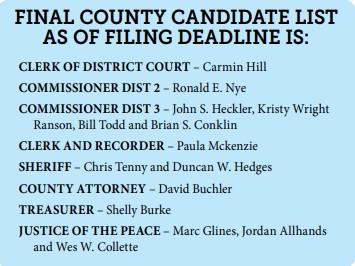 Off to the races

State, county and school board candidates have filed

Election season 2022 has officially begun. The deadlines for candidates for state, county and local school board positions have passed and the names on the ballots are set.

“In accordance with the provisions of 13-10-208, Montana Code Annotated, Montana Secretary of State Christi Jacobsen has certified to county election administrators the names and designations of candidates who have filed with the secretary of state,” said the Secretary of State’s office in a press release.

“Pursuant to statute, legislative candidates and non-legislative (federal, statewide, and district) candidates were certified. Thursday, March 24 also marked the deadline for election administrators to certify for the ballot the names of local candidates and local ballot issues.

‘Congratulations to the candidates who have officially been certified, and thank you for your dedication to serving our great state,’ said Secretary Jacobsen. ‘Best of luck to all candidates during the upcoming elections,’” the press release continued.

Updated filing statuses can be found on the 2022 candidate filing list at .https://app.mt.gov/ cgi-bin/filing/index.cgi

Here is a breakdown of how the upcoming elections will be run:

There will be a primary that concerns Madison County on June 7, 2022. It will be a poll election but mail ballots will still be sent to those on the absentee list, according to Paula McKenzie, Madison County Clerk & Recorder/Election Administrator.

Ken Walsh is running unopposed for House District 71, according to the Secretary of State’s website.

The Federal Primary Election being held on June 7 will have a few county offices and issues on the ballot. This election will be a poll election with mail ballots being sent to absentee voters, according to McKenzie. Mail in ballots for absentee voters will be mailed on May 13.

“Only those races with three or more filed candidates will appear on the Primary Ballot (this is to get those races down to two candidates for the General Election), those county offices with two or less filing go directly to the General Ballot in November,” wrote McKenzie.

All school and special district elections being held on May 3 of this year are mail ballot only. Ballots for the May 3 elections will be mailed on April 13, 2022. Candidates have until the 31st to withdraw and write-in candidates can file up to the 31st, according to Ginger Martello, Ennis School Clerk.

McKenzie will place a notice in The Madisonian letting everyone know that depending on where they reside, they may receive one, two or three ballots in the mail for the mail ballot elections (schools, police and ambulance) being held on May 3, 2022.

“The ballots need to be sent separately so we can track them accurately in MTVotes. We want everyone to get recognized for each election they vote in,” said McKenzie.