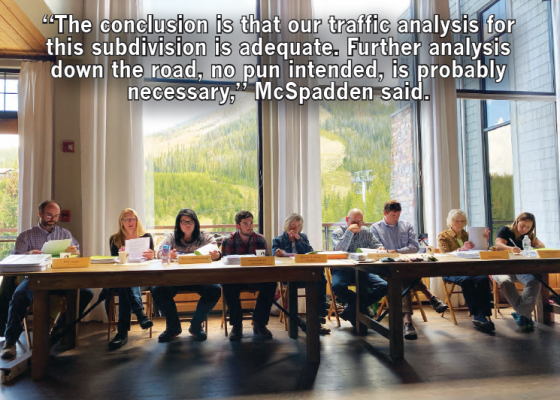 The Madison County Planning Board met on Monday primarily to discuss subdivision planning and was met with concerns about the reach of the Big Sky Fire Department and emergency evacuation policies.

After getting through the first few items on the agenda quickly, President Darlene Tussing opened the floor for public comment. Fire chief Bill Farhat voiced his concerns about the growth of Spanish Peaks and the fire department’s ability to service both the meadow and the mountain. He began by stating how the fire department is growing, but not at a rate quick enough to match that of Spanish Peaks.

“The challenge with the overall development plan from our perspective is that the growth of Spanish Peaks has been exponential as you can see. That building there is the largest private building in the state of Montana. So now this small fire department is trying to address that and the other developments,” Farhat explained.

A five mile radius is established to ensure adequate response time from the fire department to properties inside that radius. Farhat noted the response time to Spanish Peaks is 15 minutes. When a conversation began about either rebuilding or remodeling the existing fire station in the meadow, building a new station near Lone Mountain Land Company was considered to decrease the size of the response radius. That did not progress. “Nobody wanted a fire station as their neighbor, “ Farhat stated. People preferred the landscapes to the big red trucks.

Steve Johnson with the Big Sky Trails Recreation and Parks District supported Farhat’s points, and emphasized how more growth will lead to the necessity for more protection. Tussing sympathized with Farhat and the conversation moved to discussion of the Montana Club Subdivision Phase II, the lengthiest part of the meeting.

Alex Hogle, the planning director for the subdivision project, gave the presentation. According to Hogle, the Montana Club Subdivision will consist of 44.5 acres that will be home to 18 single-family residential units, one multi-family condo with 14 separate units and seven duplex structures, one maintenance and operation lot, six open space parcels and ski and trail access in the center of the project. It is an extension of an already paved territorial drive with access from Rising Bull Road, which will serve as the primary access point. This subdivision will be serviced by the existing Big Sky Water and Sewer District #363.

In regards to emergency services, Hogle explained a fire plan has been submitted and nine fire hydrants will be scattered throughout the subdivision. Montana Club Subdivision is located five miles from the fire department on the mountain and will be serviced by the Big Sky Fire Department.

Trever McSpadden with Haystack Development, the project’s technical representative, addressed concerns about the livelihood of the trail system in this area. The trail connecting the Mountain Village to Moonlight Lodge will be temporarily rerouted to ensure the safety of bikers and hikers while big equipment is on site. When the project concludes, the trail will be reconnected.

“The reroute is very effective and then hooks back up to Otter Way,” McSpadden said. “The connection to Moonlight Lodge and the base area is still there.” McSpadden took his bike out on the trail to ride the reroute himself and noted the ease of following the detour. “The recreational component is critical because it is the whole point,” he added.

“I think that it is a tremendous connection for the community so people don’t always have to get in their cars and they have another way around,” Tussing said.

McSpadden clarified points about the traffic impact study. Conducting a detailed report of traffic on a day to day basis was not needed for this development, considering an impact study occurred in 2015. “There will be a time to take a closer took at traffic, especially at the resort,” McSpadden stated. “The conclusion is that our traffic analysis for this subdivision is adequate. Further analysis down the road, no pun intended, is probably necessary.”

At the end of the public hearing, the planning board unanimously approved the preliminary platform of the Mountain Club Subdivision Phase II.