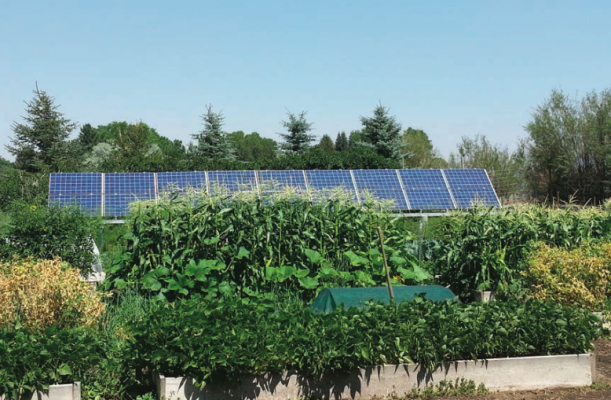 Interlacing an old parable with a new story

Once upon a time, a tattered traveler came to a small village and asked for something to eat. “No, we have barely enough for ourselves,” said the wary villagers as they started shutting the door. “Then could you spare some water for my pot?” he said with a twinkle in his eye. Producing some ordinary rocks from his packet, “these magical stones would make a delicious Stone Soup.”

“I really like eating like I’m rich when I’m not,” Kaye Suzuki said. She grows organic produce and about 50% of her produce diet comes from her home garden, a number she says surprises people.

Eating seasonally is key to sustaining that percentage. Suzuki described her palate as more limited than those who buy produce from grocery stores. “It’s just seasonal. There’s a new treat each year that we look forward to and we eat it until we cannot stand it anymore,” she said. This way, there is no temptation to buy the item at the store.

October through March are the months to focus on. Suzuki buys cauliflower, broccoli and lettuce as they do not grow well here in the winter. Things that keep better, like squash or cabbage, can be grown for the ‘darker days of winter.’

“Stone Soup!” the villagers cried, thinking the stranger quite mad. “Who ever heard of Stone Soup?” Still they gave him the water hoping to get the crazy man away from their village.

Mayor Hazen Pingree’s idea to counter the recession of the 1890s was to ‘occupy idle lands with idle hands.’ Vacant lot gardens, Pingree’s Potato Patches, started in an effort to alleviate hunger and poverty in the Detroit area, and it worked. Other cities developed similar plans, but as the economy recovered in the 1900s, the efforts dropped. “There’s a lot of things you can do in a very small space,” Suzuki said. Plots of vacant land are helpful but not indicative of success.

In the Madison Valley, salad gardening is the place to start. Lettuce, kale and spinach grow well and can be supplemented with radishes, carrots, sugar snap peas and cherry tomatoes, all of which can be grown in pots or raised beds.

“The biggest burnout I see is when people who never garden decide they’re going to raise a huge garden and provide all the food for their family,” Suzuki said. Start small, she encourages.

Soon a crowd gathered as the traveler built a fire under his large pot of water and reverently added a handful of stones. After a while, he tasted a steaming spoonful and sighed, “hmm.”

As a child of the sixties, the environmental impact of gardening was a big pull. Suzuki brought up the Locavore Movement, food miles being a pivotal component. The closer food is to you, the fewer miles and emissions needed. “It was a big start of what you see with a lot of farmer’s markets,” she said.

Worldwide, as the coronavirus pandemic trudged onward, emissions reduced as factories shut down and the economy screeched to a halt. On April 8, New Delhi, one of India’s most polluted cities, saw significant pollution reductions.

“I am hoping that at least one silver lining from this pandemic will be the renewed recognition that we can and should grow more food locally (home/community gar- dens), produce more energy locally (photovoltaic/micro hydro/wind), and generally develop strong, long-term sustainable ties to our local community and economy,” David Laufenberg, conservation programs manager with the Madison Conservation District, said in an email.

“How is it?” the curious villagers asked. “Not bad,” he smiled, “but it’s a shame I don’t have any onions.”

Fear should not drive action. Even with sparse grocery shelves, if able to support local farmers and ranchers, Suzuki urged consumers to do so. Buying cheap products in bulk motivated by fear of running out may be a short- term solution, but supporting local agriculture pays of in the long run.

“It’s the choice you make as to where you spend your time,” she said, that matters.

“In crazy times some of my sanest moments and made me more pleasant to be around were because I’d go out and pull weeds for an hour,” Suzuki said, spending time doing something beneficial for her brain, body and soul.

A bag of onions was quickly passed forward. Then the traveler said the soup might be good with potatoes, which another villager eagerly gave.

The coronavirus pandemic has been equated to a war in numerous situations, and wartimes brought citizens together to find creative solutions for widespread problems. During World War I, the War Garden Commis- sion called for citizens to be ‘soldiers of the soil.’

Rekindled War Gardens, designated Victory Gardens during World War II, were planted in residences and public parks. By 1944, 18-20 million families were providing 40% of vegetables in America.

With her own veggies and meat from a local rancher, Suzuki made vegetable beef stew. She gave it to neighbors in half quarter jars as social distancing progressed. She could not put a price on how good it felt to help those around her with a soup she made herself.

“Sometimes protecting what is yours doesn’t benefit you or your neighbors.”

Everyone wanted to have a hand in this mysterious soup. Very soon the pot was filled with celery, mushrooms, peas and barely. Happily, the traveler used them all to cook a delicious soup that fed the whole village. The villagers were amazed that such a wonderful soup could be made from stones.