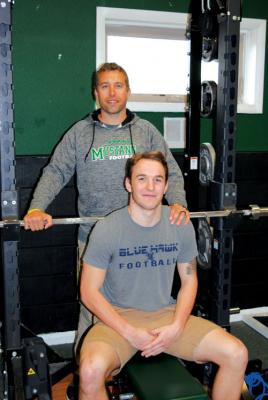 Football Player Of The Year, too.

ENNIS -- Tanner Wood, an Ennis High School senior, quarterback of the school’s 2016 – and almost 2017 – championship football squad, has caught the eye of two newspapers as well as hometown Mustang followers.

On April 28, The Bozeman Daily Chronicle and Belgrade News selected Wood for top honors as 2018’s Male Athlete of the Year. Wood was also selected as top football player for 2018. Both awards are part of the newspapers’ second annual Sports Stars Awards, where Wood joins 20 other area high school athletes to be honored as Player of the Year in their respective sports.

As part of this honor, Wood will receive a $1,000 scholarships.

Stats tell part of the story

Wood has amassed an incredible record during his football career at Ennis:

Perhaps this explains who Wood’s Hudl website has 33 followers

The Madisonian sat down with Wood and his football coach, Physical Education Instructor Chris Hess, to talk about the award, Wood’s future plans, and his coach’s perspective on Wednesday, May 2. Here’s what he had to say:

Q. How did you get your start in football?

A. “I started playing flag football in 2nd and 3rd grade, when I was living in Dillon. I started playing tackle in 6th grade,” Wood said. “My Uncle Chip was good at football and that helped. My mother also encouraged us (twin brother Corbin) to play. We played football at recess and at home.

Q. You’ve accumulated some remarkable stats over the last several years. What does it take to play ball at that level?

“Coach Hess started me in the weight room in my sophomore year. The big factor was growing stronger and putting on weight,” Wood said.

Q. You play offense and defense and on special teams – that’s almost the whole game you’re in. Must take a lot of stamina?

“Yeah,” Wood said, “At Tri-City I almost had a heat stroke, so I worked hard and ran extra to get in better shape to play that much. I got on the special teams when they found out I had a good leg and could kick. I did that until I twisted my ankle.”

Q. Why do you think you received this award, above and beyond your impressive statistics?

A. Hess answered part of this question. “He has the best record best of a senior I’ve ever seen,” said Hess. “But he also puts in lots of work. He has been a leading athlete for years, I already knew this going into the (past) season. Tanner and his brother, they put in the time necessary, as much as necessary, to accomplish their goals. Its their attitude, they don’t have days off. They push and encourage others on the team which makes everyone better. They both work hard.”

“Getting an award like this is him and everyone else on the team.” Hess continued. “He pushes them to aspire to do better. I knew what we had when we started the year, and we didn’t use him the first three games. He knew when I put him in it was time to turn it on, time to help the team.”

“I’ve been working with Tanner for the last three years,” Hess continued. “He’s dynamic in both sports and the classroom. He keeps things in perspective. I knew he was good early, but he always wanted more. There’s only one way to accomplish this, to work hard. When he sees a failing he works hard to fix it in the field or in the classroom.”

“It (the award) didn’t cross my mind (while playing),” Wood said, “but I’m grateful to get it, and I’m exicted about the possibilities with it. I will remember this forever. If I go to different schools, it could help with the scholarships, too.”

Q. You and Corbin signed with Dickinson State (N.D.) recently. How did that come about and what do you hope to do there?

“I looked at Dickinson and the U of Montana in Missoula,” Wood said. “Dickinson has a good football program and a friend of mine already goes there. Corbin is going with me.”

“I’ll try my best to go pro,” he continued, “it’s a dream of mine… but I’m also getting a biology degree. You can get more mileage out of this, and I could go into the dental field or physical therapy.”

Hess pointed out that Wood also plays basketball, and runs track. He and brother Corbin are outstanding relay runners in both short and long distance.

“My twin, we’re always pushing each other to get better,” Wood said.

Off the field, Wood said, he’s like any other kid. He likes to “socialize, hang out, play video games, be active and go to the lake.”

Q. Coach Hess, will you miss him next year? (Hess lost six senior starters on both sides of the ball from 2016’s state title-winning team.)

The Sports Stars Awards presentation will be held on May 14, 5:30 – 8:30 p.m. at the Hilton Garden Inn Bozeman. Tickets may be purchased through the Chronicle’s web site, www.bozemanchronicle.com/sportsstars. For more information contact Cindy Sease, csease@dailychronicle.com or 582-2616.

Honorees will be featured in a commemorative publication, that will be distributed at the event and inserted in the Bozeman Daily Chronicle on Sunday, May 13.

Appointed head coach of the Bobcats in December 2015.

Led back to back Brawl of the Wild victories over the University of Montana Grizzlies in 2016 & 2017.

Graduated from the University of Montana Western in Dillon with a BS in Secondary Education.