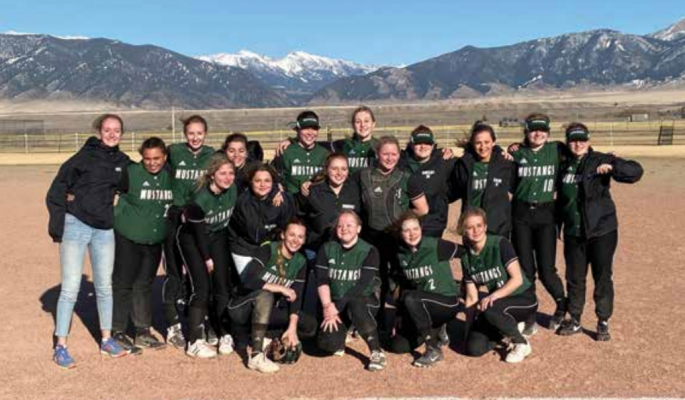 A win in the wind

Ennis girls nab a W at first game of the season

Spring is finally in full swing – varsity softball season is officially underway. The Ennis girls’ team took on Anaconda on April 1 in a home game that ended in a ‘W’ for the Lady Mustangs with a score of 4-0.

The first game of the season was a welcome one after last year’s hiatus due to – you guessed it – the pandemic. The Ennis girls’ 2020 season included only a week of practice before everything screeched to a halt, slowing down the progress they’d made in their very first season ever in 2019.

“There was so much to learn and get through that first year,” Ennis girls’ Head Coach Andy Thomas said. “Our focus was really just to get the program going. And then, 2020, we were light years ahead of where we were the year before, just from one week of practice.”

Those skills were put on hold, and this year was almost like starting over for the girls, said Coach Thomas who called 2020 a bit of a blow, “But the girls have stepped up, and have been able to accelerate the growth. I think the girls are more eager to play and compete than they were before.

Looking back at the first matchup, Coach Thomas said he’s proud of his players efforts to play a clean game. Anaconda, he said, deserved some credit too. They were threatening in several innings with zero outs and runners on – they had a chance to score, but Ennis was fortunate enough to make the plays and strikeouts when they were needed the most, stopping the Copperheads in their tracks.

Mustang props go to Jenna Snider and Payton Mallett who each made two successful runs for the team, Mallett with a tworun homerun that put the Mustangs on the board first. Ennis’ pitcher Addison Retherford went seven innings and struck out 12. “She battled really hard all day,” said Coach Thomas.

The Ennis girls may have gotten a big ‘W’, but Ennis’ other big ‘W’, the WIND, also played into the matchup. It was blowing steady at about 30 mph with gusts over 40 mph. “It was kind of like the 10th player for each team,” joked Coach Thomas.

Thinking of attending a game? Outdoor sports like softball have allowed more attendees to line the stands than basketball did this winter. Ennis’ next game is slated for another home matchup in the fields by the bus barn on April 15 at 4 p.m. against a very good Manhattan team. Fans are asked to wear masks and follow social distancing measures, as well as cheer loudly.