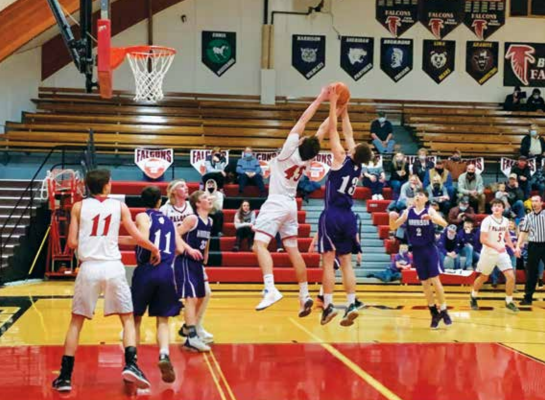 Twin for the WIN

Twin Bridges is no stranger to district fame – with their boys’ most recent win they’ve taken home five straight district titles. But for the past four years, Manhattan Christian and Twin weren’t even in the same district. For the two years prior to Twin’s streak, when Manhattan and Twin shared the district, Manhattan took the title.

Basically, the district win was not a given for Twin Bridges. Man-handlin’ Manhattan had already dealt the Falcons their only loss of the season, so when they headed back on Feb. 20, the Falcons made adjustments and came back with a plan – namely, to force Manhattan to hit threes, wrangling their point guard and dictating who shot the ball for them.

“Our guys came out and perfected a game plan,” said Twin Bridges Head Coach Josh Keller, who has been coaching the Falcons for seven years. “I don’t know that I’ve ever seen or had a Twin Bridges team hustle the way that they did, getting after it and executing some really big shots.”

Twin was up 9-2 in the first quarter, ended up getting down 12-10 at the end of the quarter, but in the second they took the lead back, entering halftime in a stalemate of sorts at 19-15. The third quarter was a charm for Twin, hitting four straight three-pointers between Matt Kaiser, Charlie Kruer and Tate Smith.

The next thing Coach Keller knew, his boys were up 31-17, “and the rest of the game was just trying to control and handle that lead.” That they did – taking home not just at W but a District 11/12C Championship plaque.

Coach Keller said the game had some amazing stats – Manhattan had 68 shots to Twin Bridges’ 27, Manhattan was six for 45 from the three-point line and had 15 offensive rebounds in the first half. “Things were stacked against us, but at the same time, they were missing shots and we were dictating who got the shots for them,” he explained.

The Falcon’s playoff flight plan started on Feb. 18 with a home matchup against Gardiner. This was a bit of a déjà vu game as they had just beat the Bruins a week prior, 72-30. The winning streak continued on the 18th with Twin Bridges nabbing a Round One W, 66-36, leading in points throughout. Kaiser led the team in scoring with 18 points, followed closely by Kruer who stacked up 16.

“We came into that game fresh,” said Coach Keller, who saw the game as comeback after a bit of a mid-season slump. “We were confident going into that game with knowledge about things we could and couldn’t do against them. The boys hustled, played their tails off and were rewarded.”

Round Two found the Falcons in a home battle against Harrison. Coach Keller said Harrison’s hard-hitting defense and tall roster make them a team that has always been tough to beat.

Similar to past encounters, the Falcons were down at the end of the first quarter. Harrison was able to stop Twin Bridges’ press attempts, and Twin was only ahead by a few points at the half. They made up for it in the second half, though, adjusting their press and ultimately defeating Harrison 57-36.

Kruer and Kaiser once again landed basket after basket, tallying 20 and 12 points respectively. Kruer made an impressive three three-pointers in the fourth quarter to solidify the win. “We were able to really put that game away,” said Keller.

The Falcons will head to Deer Lodge for the divisional tournament on Thursday, Feb. 26 where they’ll take on Phillipsburg.