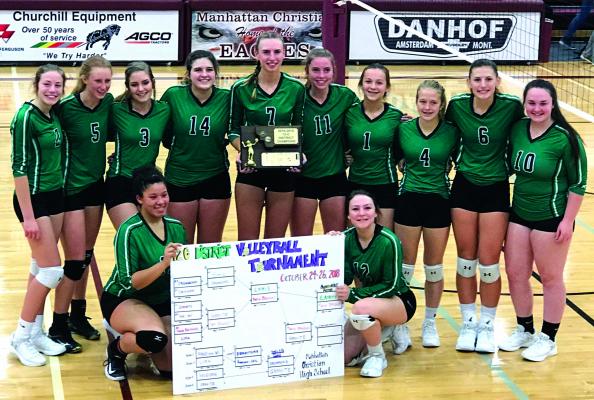 Jourdain Klein and Whitney McKitrick led the Mustangs’ all season, all the way into the state tournament, where they fell just short of last year’s state title and were knocked out in their third match, against Bridger.

The pair of seniors routinely logged double-digit kills and digs all season, and the Mustangs remained undefeated until well into the post season, suffering their first loss during the divisional championship in early November. It’s not the first time for either of them to make the All-State team.

“It’s a big honor,” says Klein, who is bound for Bozeman to study pre-physical therapy and join the Bobcats’ volleyball team, which just clinched a spot in the Big Sky Conference championship tournament for the first time in since 2012, only their second trip to the tournament since 2005. “I was really excited to be chosen.”

Klein has logged over 1,800 career kills, over 500 blocks and nearly 250 aces. It’s the third all-state selection for Klein, who played in an All-Star match hosted by the University of Providence in Great Falls on Sunday, November 18, which featured players from all across the state and from all divisions.

McKitrick has been a steady standout for the past two years on the Mustangs’ squad, which earned her second All-State selection this year. Not a match went by where she didn’t log assists in the double digits, also acting as a reliable blocker. McKitrick also attended the All-Star game in Great Falls as an alternate. She will attend the University of Montana Western in Dillon after graduation to study elementary education.

But first, Klein and McKitrick have two more seasons of high school sports each. Both will return to the lady Mustangs’ basketball team this winter before parting in the spring, Klein for the track and McKitrick for the school’s brand-new softball team.

Twin Bridges also had two standout athletes join the All-State team: seniors Riah Edsall and Anna Kaiser. Like Klein and McKitrick, they’ve been the two most-mentioned players for their team all season, leading the Falcons to one of their best seasons in recent years, they pushed the Mustangs hard for the district championship, forcing them into extra sets before falling to claim the second-place trophy and a spot in the divisional championship.

Once there, Edsall and Kaiser continued leading one of the most aggressive teams in the division, pushing opponents Manhattan Christian and Charlo into extra sets before being knocked out just short of the state tournament.

It was still one of the best seasons in recent years for the Falcons, where Edsall and Kaiser led the team in points all year. Feeling the loss of standout Kailee Oliverson, who led the Twin Bridges volleyball, basketball and track and field teams until graduating last spring and signing to play college basketball at the University of Nevada-Reno, Edsall and Kaiser stepped up and made their presence felt.

The team will have to adjust again next season as they lose two dynamic leaders.