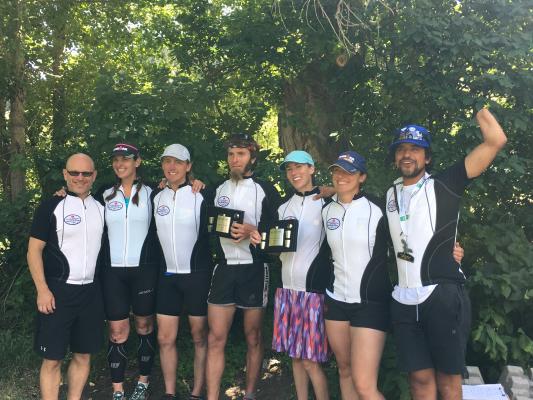 A Tri, a Tour and some TBAs

ENNIS—This weekend brought to a close a race series that might have seemed long to anyone who wasn’t one of the participants.

The Greater Yellowstone Adventure Series packed six brutally challenging races into just two months, and August 4 and 5 saw the final two of those races: the Madison Triathlon on Saturday and the Tour de Gravelly on Sunday.

Fourteen athletes took on the seventh annual Madison Triathlon, one of very few Olympic-distance events in the state.

The triathlon began with a dip in Ennis Lake for 1,200 yards, followed by a 23-mile bike along Highway 287—and up and over the five-mile-long grade of Norris Pass—to Harrison, finishing with a 6-mile run from Harrison to Pony.

Unlike most triathlons, which loop back to their starting point, the Madison is point-to-point, which means athletes end up 29 miles from where they started.

“The Madison Triathlon is not for the faint of heart,” writes race director Sam Korsmoe in the race’s description. “It’s no Iron Man, but it will probably feel like one because of the open water swim and the high elevation.”

Ingram Crossom of Tuscaloosa, Alabama, claimed the triathlon crown in a time of 2 hours, 36 minutes at 50 seconds, while Kathleen Snider of Belgrade outleaned Makenzie Kink of Austin, Texas by only two seconds, winning the women’s title in 3 hours and 3 seconds.

The triathlon doubles as the last leg of the Madison Trifecta, and the christening event for a few new TBAs—total bad asses. This year, seven people completed the Trifecta, which began back in June with the Madison Duathlon, continued with July’s Madison Marathon and finished with the triathlon.

• Lynda Andros-Clay of Bozeman, who claimed her fifth TBA title and was this year’s trifecta, with the lowest combined time across the three events. Andros-Clay also came just one race short of completing the entire GYAS in one season, a feat that remains unclaimed.

• On the men’s side, Ennis’s Corey Hardy claimed the TBA crown, and his second TBA distinction. Hardy, who has been a biker since he was 12, has spent decades racing all over the world and jumped straight into the local racing scene.

“I love that it is a local, grassroots thing. It gives people an opportunity to get out in this beautiful setting,” Hardy says. “You don’t typically have a lot of people who go around here enjoying this kind of thing, so it’s great to have something like this locally. And this kind of activity just helps promote more activity.”

There were also 4 athletes who became TBAs for the very first time on Saturday, bringing the total to 28 since the TBA idea was coined in 2012.

On Sunday, August 5, the GYAS wrapped up with one of its hardest races of all: The Tour de Gravelly. The only race that involves no running whatsoever, the 57-mile bike race travels up and over the Gravelly Range, traversing over 7,700 feet of elevation change in the process.

This year was only the second installment of the Tour, which means the field remains small. Last year’s inaugural event drew only eight riders, which jumped to 11 this year. The small field size is a testament, to how difficult the race is, says Korsmoe, but the growth is key.

“The good news is it grew. I think the word is going to get out there more because everyone just loves the route: they love Ennis, they love Montana. And we got some great days this year.”

All but two competitors hailed from Montana, with Bozeman’s Jeff Brandner and Shannon Brown, also of Bozeman, claiming the men’s and women’s titles, respectively. Brown set a new course record for the women, shaving six minutes off the old mark and setting a new standard of 6 hours, 1 minute and 1 second.

And just like that, the Greater Yellowstone Adventure Series is done for another year. For the athletes and for Korsmoe, it’s time for some well-deserved rest. But excitement for next year is already gearing up.

“I’m looking forward to 2019, because each year we get people from different parts of the country, who then take that story back home with them,” says Korsmoe. “It’s becoming mature, in a way. It’s ours, here, in Madison County, and broadcasts to the world what we have here.”