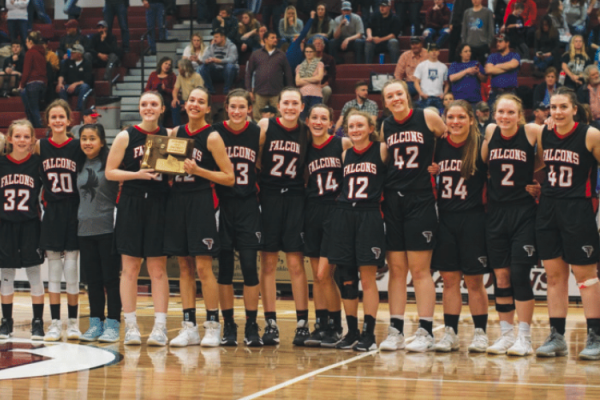 The Falcons transformed into a championship team in a single season. Twin Bridges is the champion of 2020 Girls’ District 12-C Basketball. The young team, with two eighth graders putting in some important minutes on the court, defeated the Granite Prospectors, 43-28, in Butte Feb. 22.

The point gap swelled, and Twin Bridges consistently put points up into the third quarter. Granite had their shots but could not find the net. A series of fouls kept Granite inching closer toward Twin Bridges in the fourth quarter. Free throws also kept Twin Bridges ahead. Guinnane was a strong player in Twin Bridges’ offense and defense. The Twin Bridges’ eighth graders, Ayla Janzen and Konen, were smaller than most of the Granite girls but held their own on the court. They were essential to Twin Bridges’ success. Granite grew anxious as the minutes ticked away. Two Prospectors fouled out. All of the remaining points were made at the free throw line. Twin Bridges clinched the win.