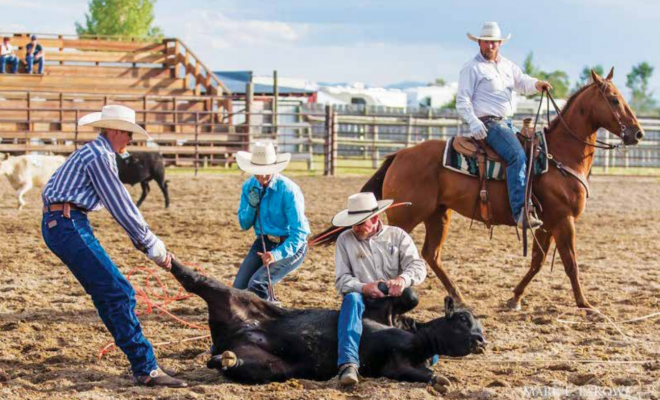 They call the thing “rodeo”

“It’s bulls and blood It’s dust and mud It’s the roar of a Sunday crowd. It’s boots and chaps It’s cowboy hats It’s spurs and latigo It’s the ropes and the reins And the joy and the pain And they call the thing rodeo.” - Garth Brooks

While a number of states claim to have been the first to start rodeos after the Civil War, Buffalo Bill Cody is usually credited with making it a form of mass entertainment when he staged his Wild West show in the 1880s.

Whether the popular appeal of rodeo stems from mythology around the American West or the excitement of watching skilled cowboys, cowgirls and their horses, the rodeo has endured for almost as long as baseball.

After his death from cancer, Ledoux was memorialized in Garth Brooks’ hit song, “Good Ride, Cowboy.”

Here in Madison County, summer is defined by rodeos, whether the professional circuit, youth competitions, or the popular, homegrown ranch rodeos. How many busy parents can you name who devote weekends to ferrying kids to Billings, Missoula and other destinations for competitions?

While the rodeo celebrities continue to draw big crowds in Montana, the local ranch rodeo may be more popular now than ever, says Bill Holden, a Madison County Fair and Rodeo board member and volunteer arena manager.

The Madison County Fair and Rodeo will be held in Twin Bridges August 11 to 15.

“Ranch rodeos are similar to the PCRA events, but go back to the basics, with local riders competing,” he says.

Holden, who owns Line Camp Saddle Shop in Silver Star and competed in his share of rodeos in his youth, says the ranch rodeos are “based on stuff you do at the ranch” such as calf roping and branding.

“The competitors are mostly local and that’s what makes it popular,” he says. “People go to a big rodeo and may know one or two competitors. At ranch rodeos, local spectators will know most of the competitors, and that makes it more interesting.”

Ranch rodeos began in the late 1800s as a way for cowboys who worked on neighboring ranches to get together and compete to see who was best at everyday work skills such as calf-roping. Today there’s no template for the run of show; each community originates its own lineup of competitions.

“For local ranch workers, and I used to be one, they can’t take a lot of time off to travel,” says Holden. “They can come into town, compete for the night, show off a bit.”

Holden said that when ranch rodeos became more popular, 10 to 15 years ago, local ranches started to sponsor their own teams.

Madison County residents and visitors will have a chance to cheer on local ranch teams at the “Ranch Hand Rodeo” to be held August 13 during the Madison County Fair and Rodeo.

“The team that wins our ranch rodeo will qualify to go to the Northern International Livestock Exposition (NILE) ranch rodeo in Billings in the fall,” said Holden.