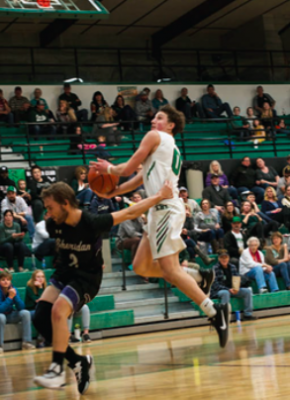 Ennis took the win against Sheridan Jan. 31, but it was a battle to the end.

The Mustangs had the lead until the final seconds of the first half. With the game tied, Sheridan scrambled under Ennis’ net as the  seconds dwindled.  Ennis sophomore, Brand Ostler, rushed to return the ball down the court with less than 15 seconds left in the first half. Ostler took a hurried step too far over the line, and the referee blew his whistle at the line violation. The Panthers got a second chance under the net. Sheridan senior, Cade McParland walked to with intensity and excitement. “LET’S GO,” he yelled, and the Sheridan fans replicated his energy with hoots and applause. McParland started the play and finished it with a two-pointer at the buzzer. Sheridan took the lead 26-24. Ennis junior Jarrett Jenkins was the first to score in the second half, bringing the score to a tied 26-26. The Mustangs moved the ball around the court but struggled to find the net in the third quarter. Two Sheridan sophomores, Kaiden Batzler and Kole Hill, kept the Panthers ahead, scoring eleven points in the third quarter. Ian Swanson rang in the final quarter with a three-pointer for the Mustangs. With five minutes left in the game Ennis trailed Sheridan by two points, 40-38. Less than a minute later, Ennis freshman Will Inman got a defensive rebound and launched the ball up-court to Swanson, who tied the game. Jenkins again broke the tie with a two-pointer. McParland fouled out of the game with a little over a minute left. The two leaders in points, Swanson for the Mustangs and Batzler for the Panthers, put up the last scores of the game. Each led their teams with 23 points.