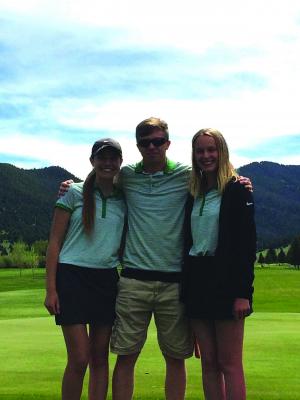 FAIRMONT - Ennis High School freshman Landri Paladichuk was uncertain of where she’d finish heading into the state tournament. Through the first day of competition, she was trailing the leader, Manhattan Christian’s Jillian Frye, by two strokes, and was tied with golfers from Harlowton and Lone Peak. At that point, it went from a physical game to a mental one.

“When I was tied for second on the first day, I was like ‘just don’t choke,’” she remembers. “But I was focused on how I was playing and not really worrying about the other girls, because that would just get in my head.”

She managed to avoid letting her nerves get the better of her, shooting a stellar 90 during the second day of competition. She outshot her competitors from Lone Peak and Harlowton, leaving just Frye’s impressive 87 ahead of her. In her first year of high school golf, she’d earned a silver medal at state.

“I wanted to place top five,” she said. “That was my main goal. So, to get second was really exciting.” With three more years of high school competition ahead of her, she now has her sights set on a future state title. But she has volleyball and basketball seasons to get through before golf season rolls around again.

Paladichuk was one of three golfers who represented Ennis at Fairmont Hot Springs May 14-16. Teammate Logan Crowley shot 116 both days for a total of 232, and the Mustangs’ lone male representative, John Fortier, shot 108 on the first day and 118 on the second, for a total of 226.