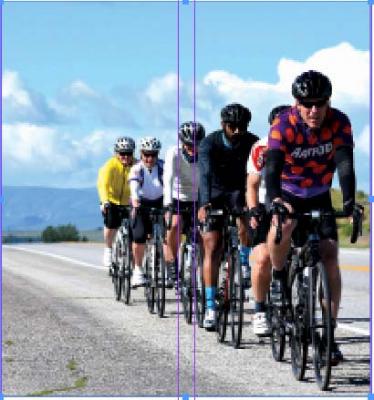 TWIN BRIDGES - For members of Montana’s cycling community, RATPOD is a well-known event, and a goal for many. This year the event—which stands for Riding Around The Pioneers in One Day—added a second ride to their annual fundraiser. Both rides began and ended at the University of Montana Western campus in Dillon, looping through the Pioneers for either 127 or 62 miles, which travels through Madison County southwest of Twin Bridges.

RATPOD was created 17 years ago as a fundraiser for the Gold Creek-based charity Camp Mak-A-Dream.

The camp was created by Harry and Sylvia Granader, who donated 87 acres of their ranch to create a space for children undergoing cancer treatment to experience the beauty of western Montana and have a chance to feel less like sick kids and more like just kids.

“Harry was taking part in building a Ronald McDonald House in Detroit and met a lot of kids and families dealing with chronic disease and cancer,” says camp executive director Kim McKearnan. “They wanted to create a place where these kids could come and have a week of respite and community. For many years, those two were here every summer.”

Camp Mak-A-Dream opened in 1995, and though its founders have since passed away, their legacy remains, and the camp is going strong. Offerings include weeklong camps for children and teens affected by cancer, as well as special camps for the siblings of those kids and their parents, collective family retreats and adult retreats for women battling cancer. In its 23 years, the camp has blossomed to serving nearly 600 campers each year.

The goal of each camp, retreat or seminar is to create a support base and friendship network of people who understand and can empathize with the many implications of dealing with a cancer diagnosis, as well as simply relieving some of that weight with activities like zip lining, swimming, archery and off-site activities and some of Montana’s bigger cities.

Over its 17-year history, RATPOD has grown into Camp Mak-A-Dream’s largest single fundraiser. Each of the ride’s 600 registrants (450 in the full 127-mile loop and 150 in the 62-mile loop) must raise at least $100 before they participate, though many riders form teams to raise money collectively, and many raise far beyond the $100 requirement.

Usually, says event manager Courtney Imhoff, the ride’s top individual fundraiser is over $10,000. Imhoff says this year there are several riders who have topped that amount. In total, RATPOD has easily raised over $4 million for Camp Mak-A-Dream.

RATPOD also uses corporate sponsors to cover the costs of putting on the event, which means nearly 100% of the funds raised by riders go directly to Camp Mak-A-Dream. The camp is always free for those who attend, and they give travel scholarships to ensure that escaping to Montana is never limited by funds. Campers have come from all 50 states as well as internationally.

“Last year we gave around $66,000 in travel scholarships,” says Imhoff. “We want to make sure this doesn’t pose a burden to the families dealing with these diagnoses. We want this to be easy and accessible for anyone who wants to come.”

Planning for each year’s RATPOD starts as soon as the previous year’s ride ends. In all, the 2018 ride featured nearly 800 riders, volunteers and staff altogether. The annual wrap-up included a post-ride barbecue back at the campus of the University of Montana Western, where former campers from Camp Mak-A-Dream spoke to riders.

“It really lets the riders know that their fundraising, truly, is so needed,” Imhoff says. “Without their support these people wouldn’t be able to get to camp. The riders really see it firsthand.”

The volunteers are also a key part of pulling the whole thing off, especially adding the second, shorter ride this year. Community support and donations of time and money are what makes the event an annual success.

“We honestly couldn’t do it without the community members,” says Imhoff. “And in Madison and Beaverhead Counties, their support is just unparalleled.”