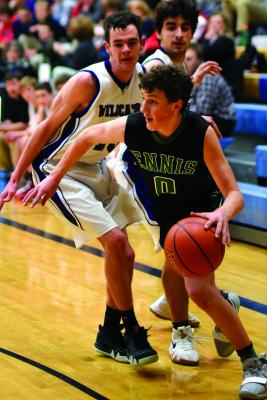 DILLON—The field of championship basketball teams is slowly being whittled down as the post-season progresses, and three Madison County teams punched their ticket to this weekend’s divisional championship in Butte.

District competition began on Thursday, February 14, when the Twin Bridges and Sheridan girls faced off and Harrison took on Drummond. The Ennis girls, as the top seed in the competition, elected to take a bye for the first round.

Twin Bridges blew past Sheridan 41 - 23 to advance to the second round, while Harrison fell to Drummond 56 - 20 after being held to single-digit points in each quarter of their first-round game.

Harrison would move into the loser’s bracket for the lady Wildcats’ second game, against the Lima bears who they played twice during the regular season. They kept a perfect record alive, beating the Bears for the third time in three matchups, 42 - 23. They would stay alive for another game.

Twin Bridges, meanwhile, played top seed Ennis on Friday, where the lady Mustangs showed just how they’d earned that top ranking. The Falcons fell 51-28, while Ennis advanced to the championship game against Drummond.

Twin Bridges and Harrison then faced off in a losers-bracket game, where Twin Bridges would advance to the consolation final in a narrow 45-40 victory. They moved on to play Philipsburg, but the lady Prospectors put an end to the Falcons’ season in a decisive 48-22 win. The Falcons would take fourth in the district and the Prospectors third.

In the championship game, it was all about senior Whitney McKitrick. The lady Mustangs would take an early and decisive lead and never let it go, outscoring Drummond 21-10 in the first quarter and 32-13 in the first half. Drummond made a late attempt to catch up with a nine-point surge in the fourth quarter, but it wasn’t enough to match McKitrick’s 15 points, along with 11 from Joree Hokanson.

The lady Mustangs would sweep the district tournament in a 44-26 victory against the Trojans, claiming a basketball title to go with their volleyball title from this fall. The Ennis and Drummond girls will advance to represent district 12C in next week’s divisional tournament.

The Twin Bridges Falcons came into this district tournament 18-0, and they left 21-0. There isn’t much more to say.

Electing not to take their first-round bye, the Falcons first played Sheridan, where they outscored the Panthers by at least double in each quarter. By halftime it was 46-13 and the Falcons showed no sign of relenting. They rolled to a 72-20 win, and a second-round matchup against local rival Ennis.

Ennis had played Harrison in the First round, advancing by a much narrower margin of 10 points in a 52-42 win over the Wildcats. But it still wasn’t enough to stop Twin Bridges, who beat the Mustangs for the third time this season, 68-38.

In another familiar matchup, the losers-bracket game of Harrison vs. Sheridan saw the Panthers take their second victory of the season in a narrow 41-38. The Wildcats would end their season, while the Panthers would move on to play Philipsburg in a chance to make the consolation game. But it seems that Sheridan’s luck had run out, and they came just short in a 58-36 loss against the Prospectors.

After falling to Twin Bridges, the Mustangs played the Lima Bears en route to their own berth in the consolation game, notching a 21-point victory 63-42 to face off against Philipsburg for the last divisional slot.

While the first quarter may have been close, ending with a 15-13 score, double-digit points from Kurt Funston, Brand Ostler and Trevor Swanson meant the Mustangs ran away with things. Holding the Prospectors to a mere four points in the second quarter and seven points in the fourth, the Mustangs would claim third place and a divisional berth in 63-37.

Meanwhile on the championship court, Twin Bridges was held to one of its narrowest margins of victory of the season, outscored by Drummond in the third and fourth quarters. But those few extra points for the Trojans couldn’t catch up to Twin’s 16-point lead going into the second half, and the Falcons would claim a 10-point victory, 49-39. Drummond would settle for second place and Twin Bridges and Drummond will move on to the divisional tournament, which begins on Thursday, February 21.