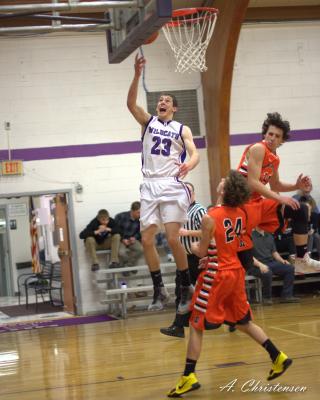 BUTTE—All eyes were on Great Falls two weekends ago for the state tournament of Class C girls, as Box Elder pulled out a six-point victory over Roy-Winifred 48 - 42 to claim their second straight state title. And last weekend, attention turned to Billings as the top eight boys’ teams in Class C faced off, where Manhattan Christian ended Arlee’s quest for a second straight state title in a decisive 83-51 rout.

But after the state tournaments were done, some of the best and brightest of the area’s basketball players got one more turn on the court in the Southwest Montana Classic All-Star basketball game on Tuesday, March 12. The game took place at the Maroon Activities Center in Butte.

Media representatives, broadcasters and sports writers from around the state took nominations from coaches around the region to determine the rosters for the games, and Madison County was well represented.

The arbitrary teams were labeled “Big Sky” and “Treasure State,” made up of student athletes from nearly a dozen schools. Of the eight coaches leading the four teams, six of them came from Ennis and Twin Bridges high schools.

Josh Keller and Andy Nye, the architects behind the Twin Bridges boys’ near-perfect season that ended with a 24-2 record, led the Big Sky Girls team. The fourth squad, the Big Sky boys, were coached by Butte Central’s Quinn Peoples and Hattie Thatcher.

Teams were also assigned randomly, but Madison County was represented in all four squads. Harrison standout Vern Homner and Whitehall’s Clay Wolfe were named to the Big Sky boys’ team, while their teammates Harrison’s Luke Cima and Whitehall’s Kade Briggs were both alternates for the squad.

Playing for Overstreet and Speck on the Treasure State side were Twin Bridges’ magic trio of the season: Bryce Nye, Daniel Kruer and Jake Hughes. They were joined by alternates Nate Konen and Charlie Kruer. Trevor Swanson of Ennis also made that team, while his brother Ian was another alternate.

For the girls, Twin Bridges’ Clancy Phillips and Whitehall’s Brynna Wolfe joined Keller and Nye for the Big Sky team. Twin’s Blu Keim was an alternate for that squad.

Scores for the Southwest Montana Classic All-Star game were not reported until after the Madisonian went to press, so for statistics and scores of the game please see our website and Facebook page.