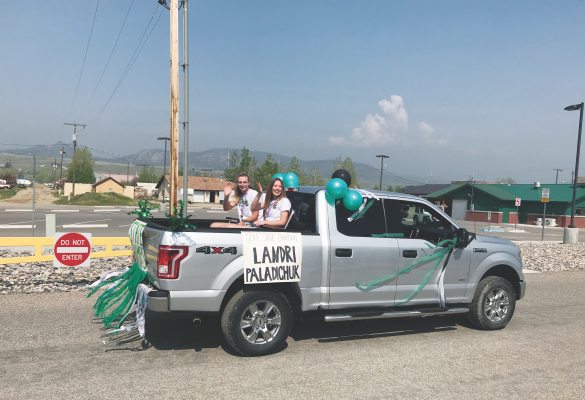 Thu, 06/13/2019 - 1:55pm
By
Hanna Kearse
news@madisoniannews.com
I finally played the way I know I can play, and it happened when it needed to happen – at state

Landri Paladichuck, a rising junior at Ennis High School, played one of her best games at the Golfing State Championship May 13 -15.

Clouds rolled over the Double Arrow Golf Course in Seely Lake, Montana, cooling the conditions for the 120 qualifying high school girls whom swung for the gold medal. Paladichuck returned to the tournament for the second time and her competition was a familiar one, the defending champion senior from Manhattan Christian, Jillian Frye.

“It was really fun to compete with her,” Paladichuck said.

Throughout the golfing season, Paladichuck’s satisfaction with her game fluctuated. At times, she felt that her performance wasn’t up to par with her skill and other times, she’d beat her personal best record.

“If I have a bad stroke, I sometimes get in my head,” Paladichuck said. “So, controlling that was a big obstacle. Golf is a mental game; you have to be mentally strong.”

Paladichuck’s father and brothers introduced her to golf early in her life and by the seventh grade, she was hooked. She enjoys meeting and playing with new people at golf courses and likes the friends she’s made in the sport.

Paladichuck scored an 88 on the first day of the championship rounds and 85 the second day, which was her second lowest score of the season. With twelve strokes less than her previous victor, Paladichuck won.

“It’s something she’d been working hard toward,” Ennis golfing coach, Jordan Overstreet said. “It was pretty cool to see her achieve her goal like that.”

It was Overstreet’s first year coaching golf and he was proud of the 16-student team whom played this year. Trevor Swanson competed in the boy’s golfing state championship, tying for fifth and earning an all-state athlete title.

“I finally played the way I know I can play, and it happened when it needed to happen – at state.” Paladichuck said.