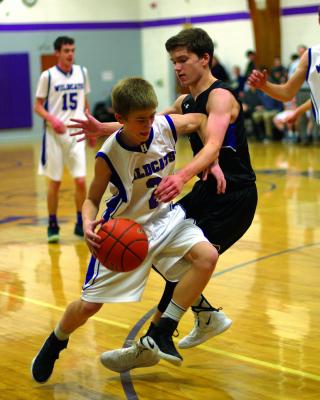 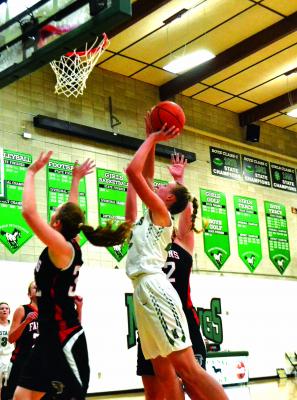 MADISON COUNTY—The Twin Bridges boys basketball team means business this season, and they held nothing back when they traveled to Three Forks for the two-day Imerys Tournament December 7 and 8.

On Friday the Falcons edged the Jefferson Panthers 48-40, with Nate Konen notching 15 points and Bryce Nye adding 12 more. The Falcons got off to a strong start, outscoring Jefferson 18-8 in the first quarter, before slowing in the second and third, their lead shrinking to just two points. But they rallied enough in the fourth to clinch a victory, continuing straight on into the afternoon’s next game against West Yellowstone and clinching a decisive 72-40 victory.

They started equally strong against Gardiner on Saturday, outscoring the Bruins 29-16 in the first half. Nye brought the heat again, leading the Falcons with 18 points, while Charlie Kruer added 16—including three 3-pointers—and Konen added another 13. The Falcons would drop the Bruins 62-57 despite a blistering 21 points from Gardiner’s Luke Stermitz and 18 points from Jacob Perius.

The lady Falcons weren’t as lucky in their Friday game against host Three Forks, falling 56-33 against the Wolves. But Twin Bridges rallied strong in their second game of the tournament and making it a Falcon sweep of West Yellowstone, topping the Wolverines 51-39.

They maintained that momentum and swept the Gardiner Bruins on Saturday as well by a score of 51-35. The lady Falcons would end the tournament 2-1, while the boys clinched a perfect 3-0 record for the weekend.

Further down the Ruby Valley, the Sheridan Panthers have yet to win a game this season. Both boys and girls’ teams fell to West Yellowstone on December 8, the boys in a score of 46-34 and the girls in a painful 55-14.

But the season continues, and the Panthers recovered their momentum to take on Granite and Harrison the following weekend, while Twin Bridges took on Lima and Ennis, Ennis added a game against Gardiner and Harrison matched up with Drummond.

Twin Bridges was first to play on Thursday evening, blowing the Lima Bears away and outscoring them by more than double in three of the four quarters. Led by 15 points from Clancy Phillip and 11 from Blu Keim, plus three-pointers from Phillip, Avery George and Kara Dale, the lady Falcons never let go of the lead and defeated the Bears 51-23.

The boys dropped the Bears by an even larger margin, notching an impressive 67-25 victory and remaining undefeated for the season thus far. They kept their streak alive on Friday when they steamrolled the Ennis Mustangs 83-39, while the lady Falcons fell at Ennis 50-26.

Ennis played Gardiner the following day with a similar result: a 55-25 victory for the girls and a closer but still painful defeat for the boys, who fell 78-57.

For Sheridan, the season’s slow start continued into the weekend, with both Granite and Harrison defeating the Panthers. But the girls notched their first victory of the season, edging Harrison 49-41 on Saturday after falling to Granite 42-26 on Friday.

The final game of a packed weekend of basketball came when Harrison took on the Drummond Trojans, falling on both sides in games that ended with the exact same score: both boys and girls lost by a narrow eight points 54-46.