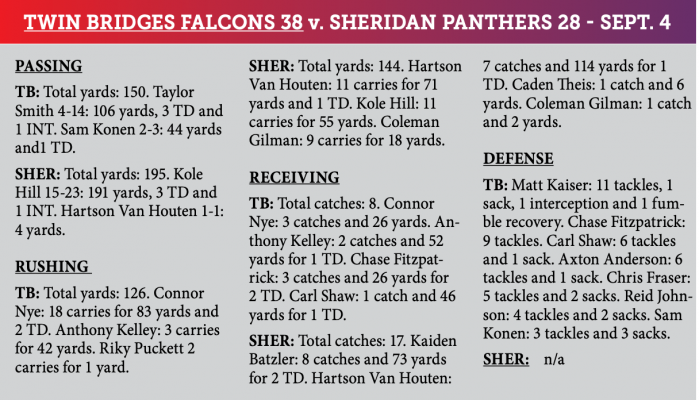 Falcons come back in the second half

The Panthers held their own against the Falcons in its second eight-man football game Sept.4. But the Twin Bridges’ team took the win in Sheridan, 38-28.

Sheridan took the lead in the second quarter after a 9-yard pass from Kole Hill to Kaiden Batzler into the endzone. The kick was good and tipped the Panthers in the lead, 7-6. It took Twin Bridges a while to return with points, but juniors Sam Konen and Chase Fitzpatrick connected with a 14- yard pass into the endzone.

Points came in more quickly as the end of the first half ticked closer. Sheridan and Twin Bridges went touchdown for touchdown. But every Panther-touchdown was paired with a successful onepoint conversion. Twin Bridges repeatedly failed its attempts for two-point conversions. Sheridan steadily kept a narrow lead into the second half.

As Twin Bridges owned the first quarter with a sole touchdown from a long pass, Sheridan owned the third quarter. Hill made a 45- yard pass to Hartson Van Houten for a touchdown, the Panther’s last of the game.

Twin Bridges sophomore Connor Nye had two successful runs into the endzone in the fourth quarter. The Falcons connected for its only successful two-point conversion of the night. A pass from Twin Bridges’ quarterback Taylor Smith started the game and ended the game. In the final minutes, Smith made a 12-yard pass to Fitzpatrick, putting the Falcons 10 points ahead of the Panthers.