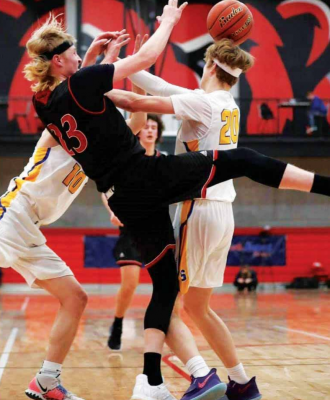 A fight to the finish

The Twin Bridges Falcon boys’ State C Tournament rollercoaster left the gates on March 11 with a much-anticipated matchup against Bridger– a 20-0 undefeated team known for its height and skill. The towering Bridger team proved to be a worthy competitor for the Falcons, but Twin came well-prepared – throwing zone presses which allowed them to get ahead of the score early.

The usual Twin Bridges suspects rose to the occasion once more, with Charlie Kruer tallying 16 points, Matt Kaiser with 15 points and nine rebounds and Tate Smith with 15.

It wasn’t all sunny skies, though. Storms were weathered with both Kruer and Kaiser getting into foul trouble, losing eight minutes of game time each. That’s when the support crew stepped into action.

Bridger did come back and make a run for it in the third quarter, but no matter – Twin kept it together and nabbed the win, 63-40.

Next in line was a rematch against Fort Benton on the 12th, an especially meaningful game for the Falcons. Fort Benton had knocked Twin out in the first round of the 2020 State C Tournament. The two teams were slated for a rematch in the third and fourth place consolation game, but Covid stopped that game in its tracks.

It was game-on this go-round, and Twin Bridges Head Coach Josh Keller said his boys were up to the challenge. They knew they’d be up against one of the best basketballers in the state – Hayden Diekhans, who recently signed with Montana Tech – but they had a game plan executed by Axton Anderson, to keep the ball out of his hands.

“Axton couldn’t have played a better game,” said Coach Keller. “He just beat him up and shut him down. He held one of the most prolific scorers in the state to seven points.”

Coach Keller, speaking with the raspy voice that often follows a weekend of big games, said the Fort Benton game was more of a blur than anything, marked with several lead changes.

With five minutes left on the clock Keller called a timeout to refocus his team, “and say, ‘Why are we here? We have time, we have five minutes, and we’re only down five points, that’s all the time in the world to come back,’” he recalled. “’Let’s remember why we’re here and not get rattled.’”

That’s when Tate Smith stood up, looked Coach Keller in the eyes, and said, “We’re here to win this thing, and get to the chipper,” recalled Keller, who said in that moment he could see the focus in his boys’ eyes as they prepared for the game’s final battle.

Twin took the lead one more time, Fort Benton did the same, but a big three from Kruer sealed the win for Twin, 39-38.

The Falcons played Scobey, a team Keller described as one of the best Class C teams he’s ever seen, in the championship game on March 13. “They played a flawless game against us,” recalled Keller, shooting 50% from the three-point line and 70% from inside the line. “We struggled with their pressure and didn’t give ourselves enough opportunities to score.”

In the end the Falcons fell to Scobey 65-27. “But my boys never gave up, they never quit, they battled to the end, and that’s all I can ask for as a coach,” said Keller, who can now take the break from basketball to rest his championship-weary vocal cords.