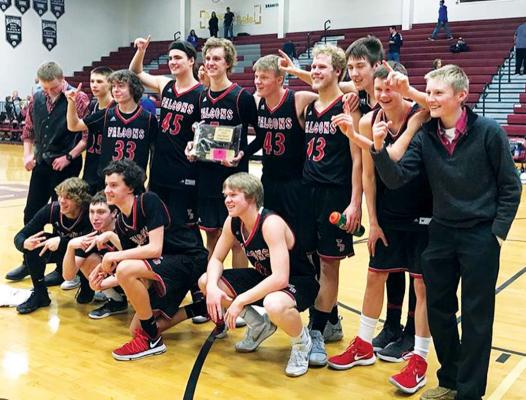 BUTTE – Winter weather could not deter either Falcon team on Feb. 17 as they ran away with two district 12C championship titles. The Lady Falcons defeated the Ennis Mustangs, 51-36, and the Falcon boys’ team defeated the Drummond Trojans, 45-33.

Up first was the heavily contested championship game between the Ennis Lady Mustangs and the Twin Bridges Lady Falcons. Earlier this season the Falcons pulled out an overtime victory over the Mustangs, 55-52. Upon a second regular season matchup, the Lady Mustangs were victorious with a two-point win, 29-27. The last time Ennis beat Twin Bridges in girls’ varsity basketball was in 2011. After losing a conference game with Harrison/Willow Creek due to their status as a junior varisty team this season, Ennis and Twin met for a third match at the University of Montana Western campus. The Lady Falcons took the win, 37-25.

Both Falcon teams are coached by Josh Keller. “The girls were focused and just came out and took care of business against an Ennis team that is very athletic and hard to score on,” said Keller. “Overall, I was just so proud of our kids. They wanted it so bad and it showed. I couldn’t have been more proud.”

With the senior duo of RaeAnne Bendon and Kailee Oliverson at the Falcon helm, Twin Bridges made an early run on the scoreboard. The Falcons had an eight-point lead after the first quarter, but the Lady Mustangs brought the game within six points at the half. Two big quarters in the second half secured the district championship for the Falcons, who now enter the divisional tournament as the top seed.

“I was pleased with the girls’ effort,” said Mustang head coach Jordan Overstreet. “They worked extremely hard the whole game, but sometimes the ball just doesn’t bounce your way. Hats off to Twin Bridges, they are a great team and played a great game.” Overstreet said his team is working on their defensive strategy before the divisional tournament and is looking forward to their opening game.

The Lady Falcons will take on the Lone Peak Lady Big Horns in their first game of the western C divisional tournament, Feb. 22-24 in Hamilton. The Lady Mustangs will face the 11C district champs, the Manhattan Christian Lady Eagles.

Following the Lady Falcons' win, the pressure was on the Falcon boys to defend their District 12C title. The Falcons responded by outscoring a solid Drummond Trojans team in three of four quarters, and charging to 45-33 win. The Falcons split wins with the Trojans this season, losing by two points in their first conference match. The second time the teams met, the Falcons were hitting their stride and drubbed the Bears in a 63-43 win.

“I thought my kids, both teams, played so hard,” said Keller. “I felt that they stayed very focused in the big situations. We played some great teams and were able to stay focused and execute – I thought the boys played as hard as any boys team I have coached.”

Sophomore point guard Bryce Nye led all scorers with 17 points during the championship match on Feb. 17 and helped the team gain a 22-15 halftime lead. The Trojans made a run for the board in the third quarter, outscoring the Falcons by two points. But the fourth and final quarter belonged to the boys in red.

The Falcons will take on the Gardiner Bruins in their first game of the western C divisional tournament, Feb. 22-24 in Hamilton.