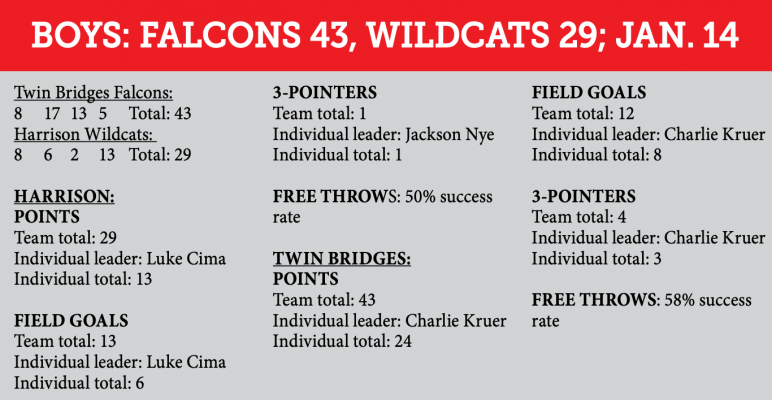 Being familiar with the powerhouse Twin Bridges team, Harrison boys knew they had their work cut out for them at their Jan. 14 matchup in Twin Bridges. Leading up to the game the Harrison Wildcats were feeling good, coming off of a home win against Gardiner on January 9.

Despite the Wildcat’s best efforts, Twin Bridges got the win against Harrison, 43-29.

Harrison coach Zach Murphy, born in Butte “with a basketball and football in hand,” said his team was in good shape for the Twin Bridges game, and they were excited for it, but Twin Bridges’ experience showed itself.

“We are not as used to those big games, and their experience was a big swing factor, especially in the middle of the game when they overwhelmed us,” said Coach Murphy. “They’re a totally different animal.”

Despite the crushing loss to Twin Bridges, the Harrison boys moved on, hosting the Ennis Mustangs on Jan. 15. This time they ground out a close victory – Wildcats 52, Mustangs 49.

Coach Murphy said his senior starters are making waves. Luke Cima “is on a different level,” said Murphy, “he’s big to the point that no one has an answer. Then there’s Jackson Nye, “he’s playing a phenomenal defense,” continued Murphy, “he always gets the hard assignment on the best player every game we play.”

Riding their win against Ennis the Wildcats became road warriors, their first game a rematch in Gardiner on Jan. 21 followed by a game at White Sulphur Springs on Jan. 23.

The Wildcat’s season may be one of ups and downs so far, but Coach Murphy said it’s felt good to be back on the court since the first game in early January. “We got that feeling, coming back, that everything is going to be ok,” he said. “We know we can only control what we can control, and we will continue to roll with the punches.”

Leading up to their matchup against Harrison, the Twin Bridges boys had just come off of three tough Class-B games in just five days. Confidence was high after that string of wins, but Head Coach Josh Keller knew his boys would still have their work cut out for them against Harrison.

In the end, “It played out a lot better than I thought,” said Coach Keller, who comes from a family of basketball coaches. “I knew they were going to come in and battle, those kids play some of the best defense in the state.”

The Falcons and Wildcats were tied eight to eight at the end of the first quarter, but as Harrison Coach Murphy noted, that’s when the Falcons swooped in, scoring 30 combined points in the second and third quarter, effectively sealing their win.

The Falcons, said Coach Keller, knew Harrison’s Cima is one of the best, so they keyed in on him, holding him to 13 points and a measly three rebounds.

The Falcon’s Charlie Kruer has superstar status this season, averaging 17 points and 7.5 rebounds per game. “He’s such a dynamic threat,” said Coach Keller, “that trying to match up with him creates a real challenge for the other team.”

Falcon Matt Kaiser, averaging 20 points and 12.5 rebounds per game, also gets superstar kudos. “He’s carried us through some droughts, and does it on both ends,” said Coach Keller. “Kruer and Kaiser are a top combo.”

The 6-0 Twin Bridges boys now look to a road matchup in White Sulphur Springs on Jan. 21 before taking on their regional rivals the Ennis Mustangs the following evening. “With that rivalry, we know both teams will be showing up to play,” said Coach Keller.