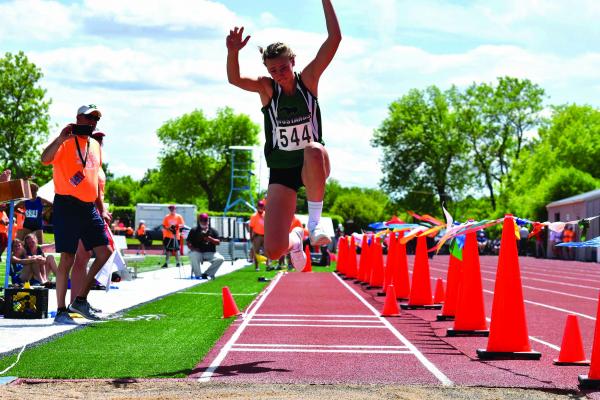 GREAT FALLS - Athletes from Ennis, Harrison, Sheridan and Twin Bridges high schools traveled to Great Falls May 25-26 for the Class C state track and field meet. The Madison Valley had representatives in throws, jumps, sprints and distance events, and they brought home some hardware from the weekend.

The Ennis men’s team claimed the overall title for the fourth year in a row, racking up 59 points between two athletes: Wood brothers Corbin and Tanner, who then returned home to graduate from Ennis High School on Sunday, May 27. Corbin won the 100- and 200-meter dashes, as well as long jump, and took second in the 400-meter dash and high jump, earning 45 of his team’s points. Tanner added the other 14 with a third-place finish in the 100-meter dash and a silver in the 200-meter dash.

“We talked about what it would take to win state, and they stepped up and did their part,” says Ennis head coach Wendy McKitrick. “The chips fell in their favor. State championships come and sometimes they don’t, but the lessons we learn along the way are what matters the most.”

Ennis’s Jourdain Klein also had a banner day, taking silver in both high jump and triple jump to score all of the women’s team’s 16 points. Only a junior, she has another season ahead of her to see if she can improve upon those results.

Harrison’s Layne Homner and Derik Defrance made the podium in their events, taking 3rd in the discus throw and 6th in the 1600-meter run, respectively. The Harrison men’s 4x400-meter relay team also scored some points with a 6th place finish.

Sprinters from Twin Bridges led the women’s team to a 3rd place overall finish, with Megan Bausch taking silver in the 400-meter dash and Kailee Oliverson winning the 100-meter hurdles and placing second in the 300-meter hurdles. Both the 4x100-meter and 4x400-meter relay teams also claimed second, and the Twin Bridges women trailed team winner Manhattan Christian by only 10 points by the end of Saturday.