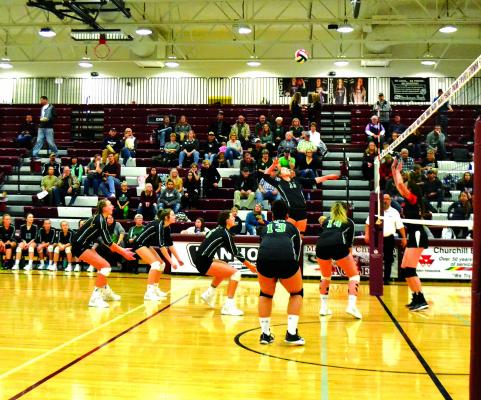 MANHATTAN—The Twin Bridges Falcons and the Ennis Mustangs continued their post-season play at the divisional volleyball tournament hosted by Manhattan Christian November 1-3. The tournament began on Thursday and was the final step in qualifying for the state championship tournament this weekend.

On the first day of competition, Twin Bridges defeated Plains in an easy three sets of 25-18, 25-16 and 25-15, improving their overall season record to 12-5. Riah Edsall and Anna Kaiser continued to display the stellar numbers they’ve shown all season, with Edsall logging 12 kills and three blocks and Kaiser adding four digs, eight assists and five aces. Taryn Johnson added another eight assists to help the Falcons move to their second-round game against host Manhattan, who had defeated Clark Fork earlier in the day.

The Falcons fell to Manhattan in a grueling five sets of 30-28, 26-24, 19-25, 20-25 and 15-11. Ashleigh Guinnane had a stellar 10 kills, while Kaiser had eight digs and 10 assists, Edsall had five blocks and Johnson had 10 aces and 10 assists. Twin Bridges then fell into the secondary bracket for their matches on the second day of competition.

Ennis drew opponent Charlo in the first round on Thursday afternoon and maintained their undefeated record, though they lost in the third set and pushed into a fourth. Scores were close: 25-23, 25-22, 20-25 and 25-22, and both teams racked up impressive statistics sheets.

Ennis’s Jourdain Klein had 23 of the Mustangs’ 48 kills, while Whitney McKitrick led Ennis in both digs and assists, with 12 and 25 respectively. Jourdain and Shelbey Klein added eight blocks each, and Joree Hokanson and Riley Robinson each contributed two aces.

The Mustangs moved into a second-round match against Gardiner, who had defeated Seeley Swan earlier in the day, and like district rival Twin Bridges pushed their opponents into extra sets. After scores of 25-19, 18-25, 25-15, 18-25 and 15-10, the Mustangs suffered their first loss of the 2018 season, notching 37 team kills compared to Gardiner’s 50. Klein was responsible for 21 of those kills as well as seven blocks, McKitrick had eight digs and 20 assists and Alyssa West had five aces.

On Friday, both Ennis and Twin Bridges moved into the secondary bracket, each with a chance to still make the championship match. Ennis was first to play, dropping the Plains Trotters in three sets of 25-19, 25-15 and 25-18. Jourdain Klein had 18 kills and eight blocks while McKitrick had five aces and 18 assists. Robinson added six digs as the Mustangs sought to claw their way back into championship contention.

After Manhattan defeated Gardiner, the Mustangs had a rematch of the second-round match that landed them in the secondary bracket, and came back with a vengeance. Klein locked in 26 kills and nine blocks, while McKitrick added eight digs, four aces and 30 assists, leaving Gardiner to settle for third place in sets of 25-22, 25-13, 21-25 and 25-16.

On Saturday evening, November 3, Ennis and host team Manhattan Christian faced off twice in a row to determine who would be district champions. The Mustangs carried their momentum strong through the first match, dropping Manhattan in sets of 25-21, 25-16, 14-25 and 25-14. But the host Eagles came back strong in the final, winner-take-all match of the tournament, edging Ennis to claim the overall title.

But because of the nature of Montana’s state qualification rules, the Mustangs will live to fight another day, having added two losses to their otherwise perfect season. Both Ennis and Manhattan Christian will move forward to the state championship tournament, held at Montana State University in Bozeman this weekend. Ennis will look to defend its title from 2017 and keep the strong momentum they’ve had all season long.