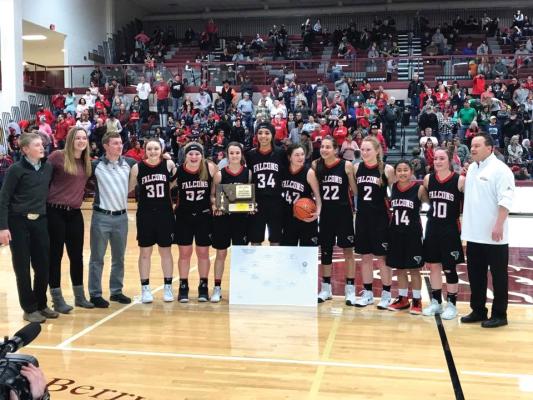 HAMILTON – Both Twin Bridges Falcon teams and the Ennis Lady Mustangs were in Hamilton last weekend for the western C divisional tournament and a bid at the state tournament. The Lady Falcons came out on top, edging the Lady Mustangs out of the title game by two points, 37-35. “Beating a team as good as Ennis for the fourth time is incredible,” said head Falcon coach Josh Keller. “Give them credit, we had Ennis down and they fought back.”

The Lady Falcons will face Box Elder in the opening round of the state tournament, March 8-10 at the MAC Center in Butte.

With the loss to the Falcons, the Lady Mustangs took the second-place spot and were challenged by the third-place team, the Clark-Fork Mountain Cats, a co-op team between Alberton and Superior schools. The Lady Mustangs were in Philipsburg on Feb. 26 and easily defeated their challengers, 54-33.

The only Madison County boys’ team to make it out of districts were the Twin Bridges Falcons, who fought to a fourth-place finish. “I was very proud of the courage and character my boys showed and I think we have a great future ahead of us,” said Coach Keller.

The Lady Falcons swept the floor in their first game of the divisional tournament, defeating the Lone Peak Lady Big Horns 59-27. Kailee Oliverson led all scorers with 33 points for the Falcons. RaeAnne Bendon put up eight points in the opening match and Blu Keim and Ashleigh Guinnane finished with six and five points, respectively.

The Falcons narrowly defeated the powerhouse Gardiner Bruins, 67-65, in their opening match. The big opening win put the Falcons in the semifinals with big numbers from Bryce Nye, who led all scorers with 20 points. Jake Hughs added nine for the Falcons and Daniel Kruer, Nate Konen and Eddie Kelly contributed to the final score.

The Lady Mustangs whipped past the Lady Vikings in the semifinals, 31-15, earning them a spot in the title game.

*No other game stats were submitted by press time.

The Lady Falcons pushed past the Arlee Scarlets in the semifinal match, 44-35. RaeAnne Bendon and Kailee Oliverson led the Lady Falcons with 10 and 16 points, respectively, and Michaela Madden and Clancy Phillips contributed eight and six points.

A disappointing loss in the semifinals sent the Falcons to the consolation bracket. The Horsemen defeated the Falcons by 10 points, 56-46. Daniel Kruer led the Falcon team with 22 points and Bryce Nye added 18.

The Falcons faced the Drummond Trojans for a fourth time, once again defeating the Trojans 53-48. Bryce Nye led all scorers with 24 points, Jake Hughs added 10 and Eddie Kelly contributed seven.

Fighting for third place and a possible chance to challenge the second-place team, the Falcons fell to the Eagles by 40 points, 71-31. Despite the hard loss for the Falcons, the team walked away with the fourth-place finish. Daniel Kruer led the Falcons with 16 points, Nye finished with seven and three other Falcons rounded out the final score.

The championship match between the Lady Falcons and the Lady Mustangs was the fifth time the teams have met this season. The Lady Falcons pulled out a narrow win, 37-35, over the Lady Mustangs. Michaela Madden led the Falcons with 10 points and Clancy Phillips contributed nine. RaeAnne Bendon and Kailee Oliverson finished with four and seven points, respectively.

For the Mustangs, Josie Hokanson led all scorers with 13 points and Danyel Martin was close behind with 10. Jourdain Klein contributed six points and Whitney McKitrick finished with four.

The challenge game on Feb. 26 found the Lady Mustangs fighting for their chance at the state title. They ultimately defeated the Lady Mountain Cats, 54-33, and will join the Lady Falcons at the state tournament, March 8-10.

*No other game stats were submitted by press time.