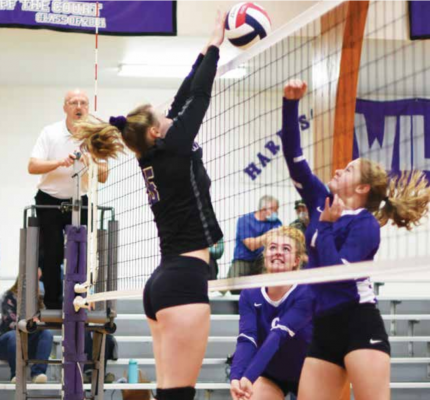 The Mustangs stomped the Wildcats in three sets in Harrison. Ennis junior Shelbey Klein was instrumental in their success, leading the Mustangs in kills, blocks and aces. Seniors Shae Lovett and Landri Paladidchuk dug deep on the court and assisted in Ennis success.

The Wildcats hosted another district competition Oct. 14 against the Sheridan Panthers. The Panthers nearly gained on the Wildcats in the last set of the game, but Harrison took the win in three sets. Again, Bacon was an important component for Harrison. She accounted for half of Harrison’s kills and assists against the Panthers. Lerum had a good game at the net with three blocks. Lerum, Rosie Chater and Sophie Mitchell tied in leading points at the serving line, each with three aces for the night.

With only a couple of weeks before the district tournament, it is unclear how the COVID-19 pandemic is shaping the schedule. Ennis currently leads the county’s District 12-C teams.