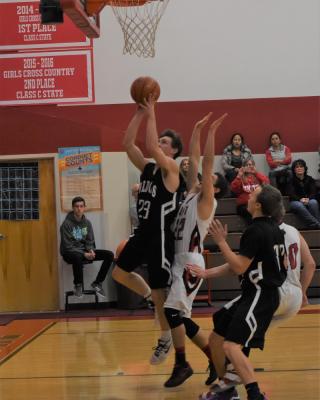 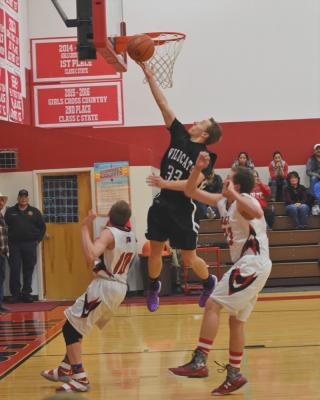 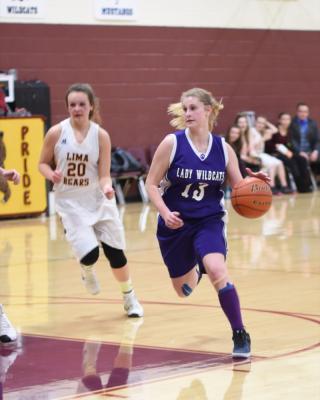 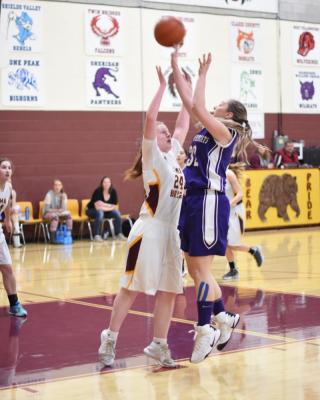 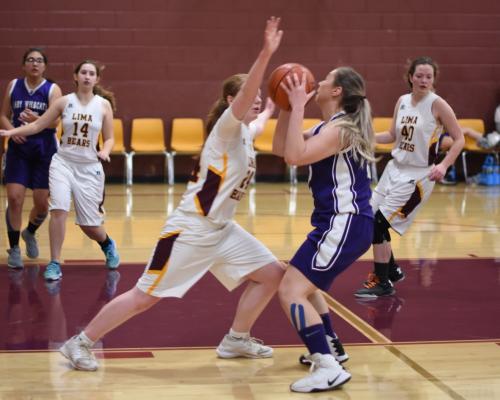 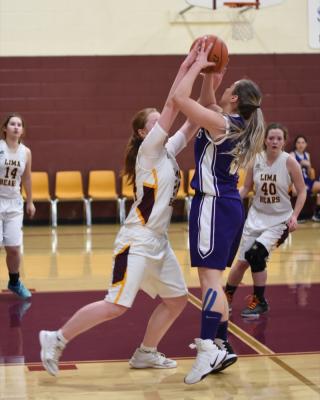 Hosting the Lone Peak Big Horns on Feb. 3, the Twin Bridges Lady Falcons sprinted to a 59-26 victory. Falcon senior duo Kailee Oliverson and RaeAnne Bendon each shot for 100 percent from the free throw line and finished with 21 and 14 points, respectively. Ashleigh Guinnane joined the ranks with 14 points and shot for 86 percent from the line.

The team as a whole finished with 16 of 22 free throw attempts, 19 steals and 10 turnovers, besting the Big Horns 26 turnovers and 67 percent shooting average from the line.

Despite putting up 24 points to the Falcon’s five in the fourth quarter, the Lone Peak Big Horns fell to Twin Bridges by 15 points. Thanks to their strong shooting in the first three quarters of play, the Falcons took the home court victory, 66-51. Falcon Bryce Nye led all scorers with 20 points, shooting perfectly from the line.

The visiting Lady Wolverines cruised to an early 18-4 lead over the Sheridan Panthers on Feb. 3, defeating the Panthers 49-26. The Panthers put forth good effort in the battle and five players contributed to the team’s total score.

The Sheridan Panthers hosted the Drummond Trojans on Feb. 2 and lost the contest, 26-68. Drummond’s Luke Holland went on an early shooting spree to propel the Trojans 39-14 at the half. Sheridan’s Moxon Lee put up nine points in the first half and Jason Chisholm knocked down a trey to keep the Panther’s in the game. Outscored in the third quarter, the Panthers held the Trojans to 10 points in the fourth quarter.

The visiting West Yellowstone Wolverines rolled to a 62-27 win against the Panthers on Feb. 3. The eleven-man roster saw points from eight players to aide in the Wolverine win. Sheridan’s bench put forth good effort as most of the team contributed to the final 27 points.

The Ennis Mustangs were just 10 points short of a home court victory on Feb. 1. The Mustangs hosted the class B Boulder Panthers and lost, 45-55. Led by trio Clay Coffman, Chris Funston and Gus Dickinson, the Mustangs could not match Boulder’s scoring success in the second half.

On Feb. 2, the Ennis Mustangs welcomed the Granite Prospectors to Ron Pederson Memorial Gym and the Prospectors wore out the welcome, defeating Ennis 43-56. Tied after the first quarter, the Mustangs trailed by one point at the half. Foul trouble for the Mustangs in the fourth quarter sent Granite’s Colter Grange to the line for eight successful points, pushing the Prospectors to 21 points in the final quarter.

The Harrison/Willow Creek Wildcats were in West Yellowstone on Feb. 2 for a battle against the Wolverines. Strong shooting in the first half kept the Wildcats and Wolverines closely matched but with only 16 points in the second half, the Wildcats lost to the Wolverines, 43-56.

Traveling to Lima on Feb. 3, the Harrison/Willow Creek Wildcats defeated the Lima Bears, 45-33. Lima drilled three-pointers in the beginning of the bout, but Derik DeFrance led all scorers with 18 points, putting nine points down in both the first and final quarters.

Harrison/Willow Creek Wildcats were on the road last weekend as they traveled to West Yellowstone on Feb. 2. Tied at 14 at the half, the Lady Wolverines put up 15 points in the third, holding the Wildcats to nine. Unable to hold on, the Wildcats fell to the Wolverines, 28-36.

Two points separated the Lady Bears and the Lady Wildcats of Harrison/Willow Creek as the battled in Lima on Feb. 3. Leading at the half the Wildcats fell to the Bears, 35-37, after the Bears pushed ahead in the third quarter with 16 points.