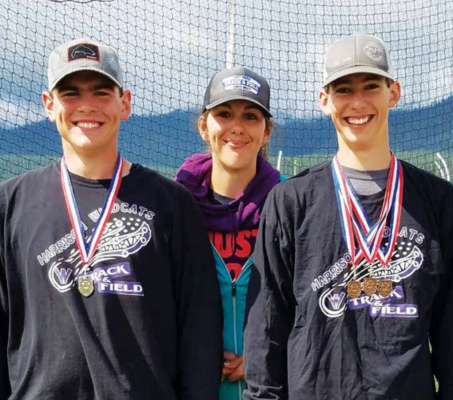 Grab your discus – after missing out last season due to Covid, track and field season is back and underway. To usher in the spring sport, Harrison Track and Field Head Coach Heather Tyler-Hjelle held a throwing clinic on March 20, inviting other districts to join in.

The free clinic, said Coach Tyler-Hjelle, hit the basics of the basics. “I happen to have a whole bunch of useless knowledge when it comes to this type of stuff,” she joked. “And I like doing it and helping other schools.”

Much of the throwing knowledge Coach Tyler-Hjelle was able to impart upon the young competitors came from her high school track coach, Wendell Griffin. Griffin coached his sister, Lorna Griffin, who went on to compete in the Olympics in the 1980s.

“So, what I stress is what he always stressed, when it comes to throwing,” said Coach Tyler-Hjelle. “It’s all in the right foot essentially. Keep your heel up, and a throw is not really a throw, but a pull with your hips.”

The ten clinic attendees spent their mid-March Saturday taking in tips from film, doing drills in the gym, and eventually heading outside to throw the discus for nearly two hours. Shotput took up about an hour in the afternoon, and the day was rounded out with javelin practice indoors as the snow began to fall.

Track practice started March 15, and Harrison’s first meet will be April 10 in Laurel.

Coach Tyler-Hjelle, who has been coaching for six years, five at Harrison, said this will be the smallest team she’s led. Usually around 14 athletes compete in track and field, she said, but this season only five signed up.

Tyler-Hjelle hypothesized the small turnout could be due to mask-wearing burnout, as well as the fact there was no track season last year due to the pandemic. But since she’s eight months pregnant, she figures this would be the best year to lead a smaller group of athletes.

Her due date is June 5 – a week after the state track meet, so she is hopeful she’ll make it to the end of the season before her firstborn arrives.