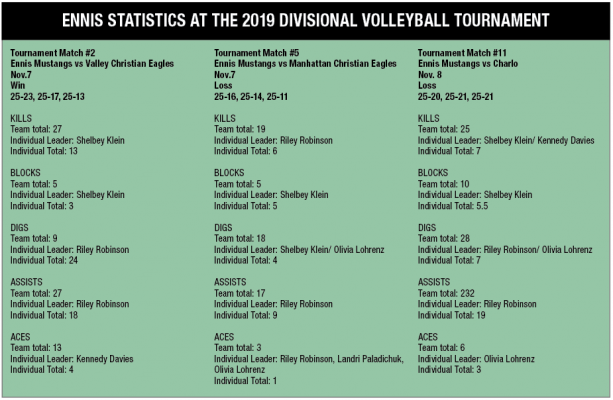 Ennis Mustangs out in 3

The Ennis Mustangs advanced to the second round before losing two matches in the Western C Divisional Volleyball Tournament at Manhattan Christian School Nov. 7-9.

They first took down the Valley Christian Eagles in three straight sets (25-23, 25-17, 25-13) Nov. 7. It was a close first set but the Mustangs finished strong. Ennis senior Riley Robinson led the Mustangs in assists, as she has done in almost every match this season. Ennis sophomore Shelbey Klein had a successful year for the Mustangs and contributed to their success on the court, especially at the net. For the Mustangs’ last win of the year, Klein led in kill and blocks. Kennedy Davies, a senior player for Ennis, was another instrumental player in playoffs.

The Mustangs took on the Charlo Vikings, who defeated them in three close sets (25-20. 25-21, 25-21). The Vikings would advance to the championship match, placing second in the tournament. Manhattan Christian Eagles won the 2019 Western C Divisional Volleyball Tournament.

The 2019 State Class C Volleyball Tournament will be held at Montana State University in Bozeman Nov. 14-16.