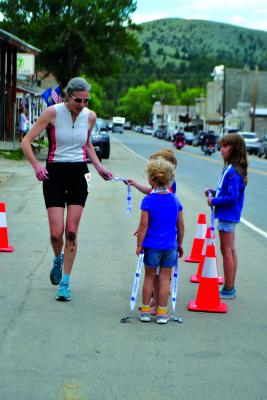 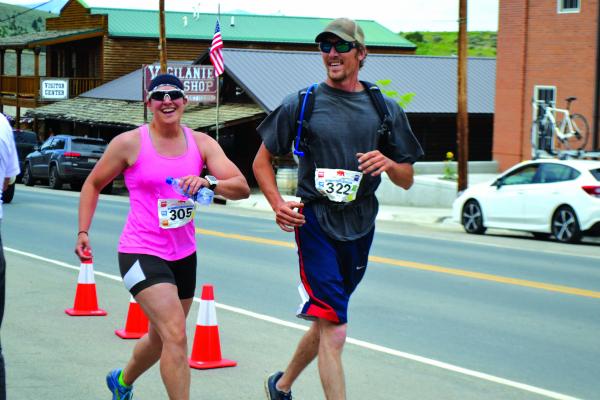 ENNIS— Last week, we introduced you to Sam Korsmoe, race director and outdoor educator extraordinaire, and this week we begin a reporter’s journey to achieve what only 24 have achieved in the history of the GYAS: the title of total badass (TBA, as it’s referred to by participants).

This past Sunday, July 8, marked the second race in the GYAS this season: the Madison Duathlon. In its seventh year, the Duathlon drew 21 competitors—a fairly average field for the unique event. The less-common cousin of the triathlon, a duathlon can take many forms, but always includes cycling and running (don’t confuse it with the Olympic biathlon, made up of cross country skiing and target shooting—this is a whole different animal).

For the Madison event, competitors began in downtown Ennis at Lion’s Park and biked 14 miles to the transition point, after which they dropped their bikes with race volunteers and scampered the seven remaining miles to Virginia City on foot.

I had read the pre-race update sent out by race director Korsmoe, advising us to “be ready to get muddy.” But I still came in a little bit naïve to what I was getting myself into. My false sense of security was lulled a little deeper by the first seven miles of the cycling leg. Following Highway 287 out of Ennis and turning onto Varney Road, things were great. The road was flat, the cycling fast and easy as I fell in with four other cyclists and did my best to draft against the wind.

But things changed around mile No. 8.

Ennis sits around 5,000 feet above sea level. Korsmoe’s race preview had mentioned a sizeable elevation gain by the end of the cycling leg of the race. By the time riders reach the bike-run transition, they’re at about 8,000 feet above sea level, and at the highest point of the race. Three thousand was a nice, round number in my head that didn’t seem too intimidating. But once we turned off Varney Road onto Shining Mountains Loop, I learned exactly what 3,000 feet of elevation looks like. And how much it hurts the quads to bike up it.

Needless to say, there was some walking of the bike. By the time I reached mile No. 12, I was certain I’d be faster walking up the hill than trying to maintain the tiny bit of momentum I may have worked up. By this point all four of my cycling companions were far gone (which is fortunate, because it meant nobody could see me in my sorry state) so I swallowed my pride and hopped off my bike.

Up Shining Mountains and Axolotl Road, we neared the transition at Twin (Axolotl) Lakes. Cresting the worst of the hill and catching some of my breath, I finally got a chance to look around and see where all that work had gotten me. It smelled like sagebrush at 8,000 feet; I could see Sphinx Mountain to the southeast and nothing but lupine and yellow balsamroot as far as the eye could see.

As we reached the transition point, I figured it would feel good to get off my bike and start running. But six miles of uphill drag on the legs will do some damage, and it took me the better part of a mile to get the hitch out of my stride. But that was okay, because by the time the first mile of the running segment is done, it’s a long downhill coast all the way into Virginia City. I kept my eyes peeled for wildlife, but saw none aside from a family of four pronghorn and a few different types of birds.

I jumped a few puddles as I descended and took in the brushy, high-elevation scenery as I descended toward town, which I could finally see for the last mile. I looked back at the mountain I’d just come up and over, amazed at the fact that I’d come 21 miles under my own kinetic energy. It was one of the hardest things I’ve ever done voluntarily, but also some of the most fun I’ve ever had racing.

In Virginia City, the Madison Duathlon finish line sits right in front of the old county courthouse. It might have been one of the smallest races I’d participated in by number of participants, but it was one of the largest in terms of spirit and straight-up fun. As each athlete crossed the finish line, they turned to those who had come in ahead of them to gripe about the hills and the mud puddles, always with a grin on their face. They wouldn’t have had it any other way.

Post-race, participants enjoyed a barbecue and beverages before having their bikes and equipment returned to them by the (stellar) race volunteers. On a summer Sunday in Virginia City, there’s no shortage of activities, so athletes—who came from as far away as California and Texas—were able to take in the sights of the Madison Valley in full swing.

Duathlon champions, which included Neal Andrews of Bozeman, who has won the event every time since its inception, received a bottle of Willie’s reserve bourbon for their efforts, and master’s champions received engraved wooden cutting boards bearing the Madison Duathlon logo. And before they’d even caught their breath, participants were planning for the next event in the GYAS—the Madison Marathon, which will take place in less than two weeks on Saturday, July 21. It’s the second element of the GYAS Trifecta, and will be immediately followed the next day by the Big Sky Marathon.

So stay tuned: Part III of our series will come when this aspiring TBA makes her first attempt at a 26.2.

At least I’ve got my new friends at the GYAS to cheer me on.