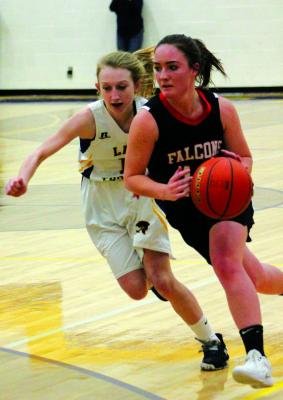 The Falcons remained undefeated in a narrow 51-47 victory against the Trojans, with three players notching points into the double digits. Bryce Nye logged 17 points including one three-pointer, while Charlie Kruer added 15, nine of which came from three-pointers. Nate Konen also added 15.

The lady Falcons weren’t as lucky Thursday evening, outscored by Whitehall 65-24. Avery George and Ashleigh Guinnane scored 17 of Twin Bridges’ 24 points between the two of them, notching nine and eight points respectively.

But they were no match for Whitehall’s Jada Clarkson, who rolled to 20 points, Asha Noyes’ 17 and Brynna Wolfe’s 12. The lady Falcons traied from the start, outscored in the first quarter 24-5 while Whitehall’s lead continued to expand.

Twin Bridges had a quick turnaround, traveling to Gallatin Gateway to take on Lone Peak on Friday, January 4. The outcome would be similar to Friday’s game though the lady Falcons held on closer. But the Big Horns still managed to snag a victory, dropping Twin Bridges 44-37.

The boys ran away with things in Gallatin Gateway, routing the Big Horns by nearly 50 points to win 73-28.

Also on Friday, the Ennis Mustangs traveled to Philipsburg to take on the Granite Prospectors. The boys fell to Granite 56-42, while the lady Mustangs took the win in 37-22

The girls then kept a five-game winning streak alive the next day, beating White Sulphur Springs handily at home 58-28. The boys would bounce back from Friday’s defeat in one of their highest-scoring games of the season, dropping the Hornets 84-71.

The Harrison Wildcats also had a full weekend, traveling to Lima on Friday before hosting West Yellowstone on Saturday. Boys and girls swept the Bears on Friday, the girls in 46-33 to notch their second win of the season and the boys in 61-41, roaring back in the second half after an initial onslaught by the Bears in the first half. Vern Homner scored nearly half of Harrison’s points with 24, while Joe Cima added 14 more.

On Saturday, the West Yellowstone Wolverines attempted to unseat the Wildcats but weren’t successful as Harrison carried its Friday momentum into the weekend. After another slow start being outscored 14-3 in the first quarter, Harrison eked out a three-point victory 41-38, with Homner adding 11 points and Cima adding 10 to score half of Harrison’s points between the pair of them.

The lady Wildcats weren’t so lucky against West Yellowstone, falling 64-46. The boys now have a 4-4 record this season, while the girls sit at 2-5.

Sheridan suffered four hard defeats over the weekend, with both teams falling to Drummond on Friday and to Gardiner on Saturday. The Panthers fought hard but it just wasn’t enough as they hosted Drummond, the boys falling 55-28 and the girls 58-20.

On Saturday the Panthers traveled to Gardiner, falling again in scores of 53-27 on the girls’ side and a painful 76-29 for the boys.

The last game of the weekend came when Whitehall played Manhattan Christian, the Trojans earning a pair of victories to improve their records in the new year. The boys defeated the Eagles 53-37, while the girls pulled out a 47-33 victory.