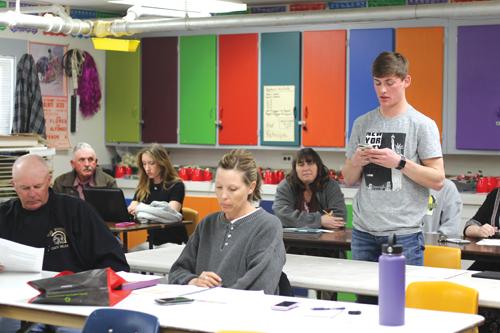 Wrestling a possibility for Harrison School?

The Harrison School Board met on April 9 and heard from Whitehall wrestling coach Mark Nelson about the possibility of a high school team co-op. While no decision about pursuing a co-op was made, the board asked activities director Connie Young to gauge student interest via a survey for grades 7-12.

The board began talking about a possible co-op during their March meeting, after Superintendent Fred Hofman was approached by Whitehall’s Superintendent John Sullivan. A wrestling co-op could result in students not participating in high school basketball because of the overlapping seasons and would need to be offset with another girls’ sport.

“We’re not trying to steal any kids or anything like that,” said Nelson, who has 15 wrestlers on his squad. “This would just be an opportunity for kids to come over and try it out – you don’t have to have experience to walk on our mat.” The little guy program in Whitehall also includes several junior high and elementary students from Harrison who have seen success with the program.

Young agreed with the idea of offering more variety. “At all my AD meetings they are always saying the more diversified you are, the better off you’re going to be,” she said. “I’m not saying this is the answer, but I think it’s a good thing to have choices.”

If the board decided to approve a wrestling co-op with Whitehall, Hofman informed them a girls’ sport would need to be added in order to keep numbers even. “I know Whitehall has a girls’ tennis team and I think Ennis just brought on softball, so there are options, but that’s just something we have to remember if we move forward.”

The board will continue their discussion at their next meeting, after gauging student interest.

After officially deciding to move to an all-mail, county run election, District Clerk Judi Ward notified the board of the election’s cancellation. “As of the end of the day April 5, the Harrison School is cancelling the election by acclamation,” Ward said.

Only two candidates filed for two seats: Timbre Murphy for a two-year term and Mark Homner for a three-year term. Both Murphy and Homner currently serve on the board.