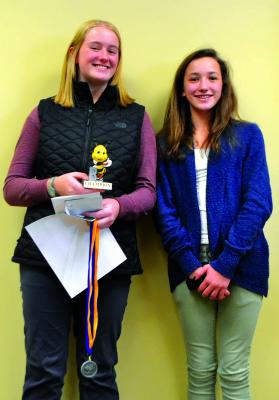 VIRGINIA CITY—After a weather delay that gave competitors a few extra days to study the word list, the Madison County spelling bee was held at the county administrative building in Virginia City on Monday, March 4.

After a reading of the rules and a practice round to ease some of the jitters, the bee began in earnest. Round one eliminated only four competitors, but as the words became more difficult the weeding-out accelerated. Eleven spellers were eliminated in round two, leaving only six advancing to the third round, which halved the field again and left only three heading into round four.

Dale and Mann had a spell-off to determine the runner-up, and with “crochet,” Dale clinched the second-place spot.

With her victory, Dana Lerum earned the chance to represent Madison County at the state spelling bee, which will take place at Rocky Mountain College in Billings on March 16. In case Lerum cannot attend the state bee, Dale will take her place. Lerum also earned $50 donated by local sponsors, while Dale took home a $25 prize.

Winners of the state bee will move on to the Scripps National Spelling Bee in National Harbor, Maryland in May.