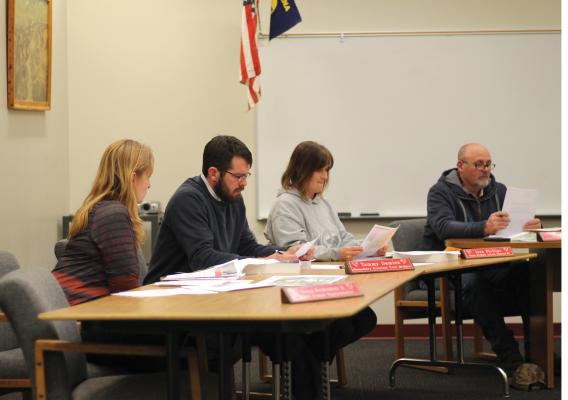 Wed, 03/07/2018 - 8:54am
By
Caitlin Avey
news@madisoniannews.com
She's done nothing but wonderful things for our staff and students." Superintendent Chad Johnson on renewing Tammy Demien's principal contract.

Twin Bridges School Board met for a regularly scheduled meeting of Feb. 20. Prior to their regular meeting, the board’s facilities committee heard from the Twin Bridges Town Council and Great West Engineering’s Jeremiah Theyes regarding a storm water and sidewalk project between the town and the school. No motions or decisions were made regarding the project and both parties agreed to more time to digest information. A special meeting was set for 5 p.m. March 20.

Board members whipped through there regularly scheduled meeting before moving into a closed session for an attendance appeals.

Twin Bridges Principal Tammy Demien had a positive report out of the elementary school, citing upcoming dates for students including the state science test, bingo for books and the third grade Smarter Balance test. Bingo for books will take place March 1 from 6-7:30 p.m. at the school cafeteria and is a program instituted to promote literacy in students. Demien also reported to the board the school spelling bee and geography winners who will go on the county bee’s and potentially state.

Johnson also touted the middle school students for their “exceptional” and “awesome” behavior during the middle school band festival. “I’m extremely proud of our kids,” Johnson said. “They were phenomenal and incredibly respectful throughout the whole day and they sounded great!”

Johnson made a mention of the school’s upcoming change to their drop off and pick up spots, which Johnson said would be in the school newsletter. Starting March 26, bus drop off/pick up will be in the back of the school.

Thinking ahead to the upcoming May election, the board unanimously voted to approve an all-mail ballot through the county and will discuss if they wish to ask for additional levies during their March 20 meeting. The board has three trustee seats up for re-election; two seats with a three-year term and one seat with a two-year term.