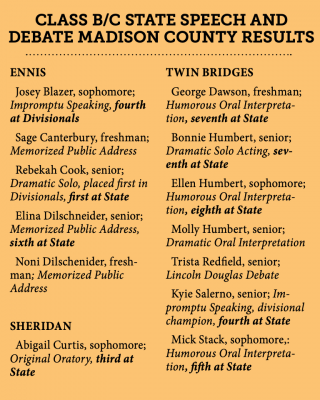 Students from Twin Bridges, Sheridan and Ennis performed over the weekend in speech, drama and debate. All Twin Bridges students that went to Divisionals advanced to state, Sheridan’s Abigail Curtis placed third at Divisionals in Original Oratory and Ennis’ team placed second overall in Drama.

Speech and debate coaches from the three schools felt it was a bit more difficult than normal to keep students motivated with the virtual format.

“It’s been a struggle,” Mr. Nicholas Dawson, Twin Bridges’ speech and debate coach and high school English teacher, said. “I’ve been really proud of how my team has handled it, but they lose a lot of the vitality of the speech and drama meets. Speech and drama meets have a great social atmosphere. They tend to build a lot of friendships and good relationships with other teams.”

“There’s a blandness to it,” Kyie Salerno, Twin Bridges speech and debate senior,” said, describing the feel of the virtual meets.

“It’s usually a pretty social experience,” Ms. Emma Steffen, Ennis’ speech and debate coach along with her husband, Kyle Boling, said. In many cases, students choose to participate in speech and debate to meet people from other schools and reconnect with friends that live in other areas from past events.

Ms. Rachel Minert, Sheridan speech and debate coach, explained that as a judge, occasional lags and technology issues made critiquing students interesting. Sometimes you see a students’ lips moving, but hear the words a few seconds later, or the internet connection is not ideal. Many coaches doubled as judges this season.

“You’re just not getting the whole picture all the time,” Ms. Minert said.

Students had to adapt to speaking and performing to a camera on a computer rather than an audience. Ms. Steffen pointed out that some freshman, new to speech and debate, felt the format was a little less intimidating than jumping full force into speaking in front of many people.

That public speaking skill and being able to be comfortable with oneself is a benefit of speech and debate. Additionally, students learn that judging is subjective—one judge may love something they are doing, and another may not. Ms. Minert equated this to how it might go in the real world—one boss thinks you are doing great, and another is not your biggest fan.

“That’s just kind of how life goes,” she said.