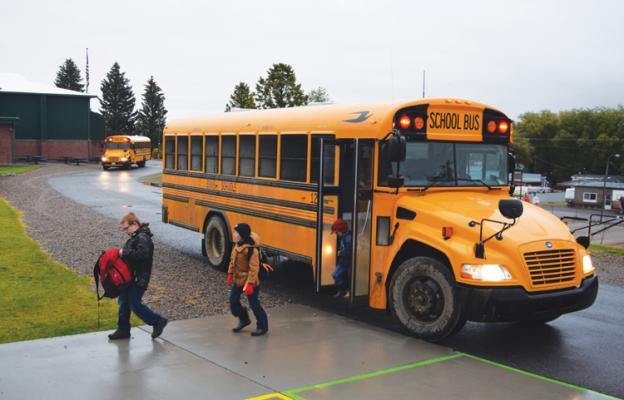 Wed, 04/04/2018 - 9:29am
By
Caitlin Avey
news@madisoniannews.com
“You have a real opportunity to set their mood for the day and get them excited about going to school.” John Lee, Ennis Schools Transportation Supervisor

Ennis School held a meeting for those interested in becoming bus drivers on March 27. While the meeting was slim with recruits, transportation supervisor John Lee provided information about school bus routes, trainings and certifications, and potential benefits.

Schools around the county, state and nation are struggling to find people to fill one of the schools' most important roles. Some of the problems are due to funding, but some due to the hours required.

Ennis Superintendent Casey Klasna said the hours seem to be the biggest deterrent. “It’s the split hours that make it hard for us to find people interested and willing to drive,” he said.

Lee said being with the kids makes up for the strange hours. “You’re the first person they see in the morning and last one they see going home,” he said. “You have a real opportunity to set their mood for the day and get them excited about going to school.”

Currently, Ennis has five routes, with the earliest route taking off from the bus barn north of town at 6 a.m. and returning around 7:45 a.m.  The latest shift departs at 6:35 a.m. to have students at the school and ready to go by class time at 8:05 a.m. Drivers then have a few chores to fulfill, such as cleaning up, washing windows and getting ready for the return trip when school lets out. It’s the early morning and midday route hours that make it hard for people to commit, but Lee said he is willing to work with drivers. “If we can set up a split shift, where one person drives in the morning and one drives that route in the afternoon, I’m flexible – I’m not against splitting the duties,” he said.

While the morning and afternoon school routes are the top priority, drivers are also needed for extracurricular activities.

Lee said training is dependent on “how fast you learn,” meaning how quickly you can pass all of your certifications, which include a written test, CDL and completing a Montana Department of Transportation physical. Once that is complete, new drivers work and train with Lee to learn the routes and Ennis’ fleet of buses. Drivers must also complete 15 hours of online training every year. “If you can drive a truck, you can drive a bus,” said Lee.

Just like every job, being a bus driver can have its difficulties, aside from split hours; Lee said the biggest problem bus drivers face is other drivers not obeying the laws. “We get a lot of people passing us when we have our stop signs out,” he said. “And we try to prosecute everyone we can catch doing it.”

Lee said the Ennis fleet is equipped with cameras to catch license plates of drivers who pass when the stop sign is out.

Ennis Police Chief John Moore attended the meeting to fingerprint new recruits and noted even police and ambulances cannot pass a bus with its stop sign out. “Even if we have our sirens and lights on, that’s the one exception for us because of the danger it could bring to kids trying to cross the street,” he said.

Lee said the school is in good shape for the next school year, but the school hopes to hire one or two more drivers. According to Klasna and Lee, drivers can qualify for school benefits, such as half-insurance and paid sick leave, if they work sufficient hours. But the biggest reward, according to Lee, is spending time with the kids. “That’s why we all do this,” he said. “For these kids.”

Because of statewide problems finding bus drivers, the Montana Legislature passed House Bill 355, which changes the definition of a school bus to include certain vehicles that could be swapped out while still receiving transportation reimbursement.

*If you’re interested in learning more about becoming a bus driver either in Ennis, or elsewhere in Madison County, contact the schools superintendent or administration office.