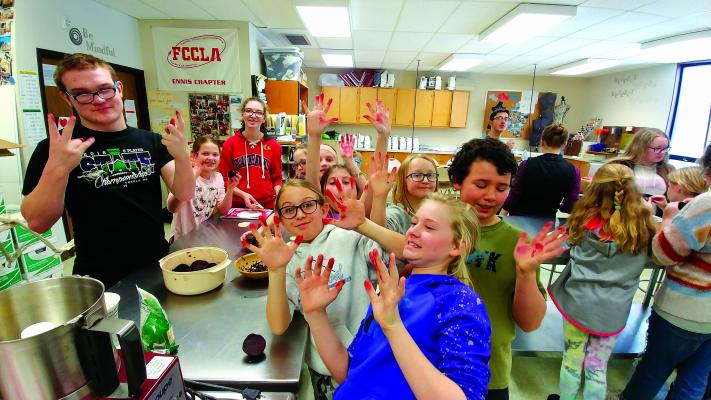 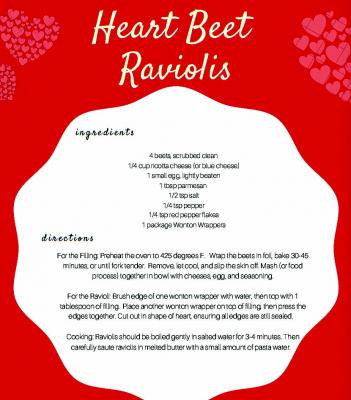 Harvest of the Month gets down and dirty with colorful pasta

ENNIS – The Harvest of the Month program continued in February at Ennis Schools when fifth graders tackled a complex recipe, making ravioli that left their cutting boards looking something like a murder scene.

But nobody was harmed in the making of Heart Beet Ravioli aside from a few unfortunate root vegetables, which left students’ fingers stained pink. The experiment even converted a few sworn beet-haters, said culinary science teacher Jamie Diehl.

Each month, Diehl leads a different class of students in learning about one of Montana’s crops and getting their hands dirty—literally, in this case—cooking and eating the bounty that comes from Big Sky Country.

Beets have been cultivated for thousands of years, initially used for animal feed. A member of the same family as Swiss chard and notable for their characteristic dark purple color, their distinct sweet flavor comes from the highest sugar content of any vegetable. But not all beets are purple: some are white or yellow, or even red and white striped like the Chioggia beet, which earned the nickname “candy cane beet.”

The root vegetable doesn’t grow in the wintertime but can be stored for months in the right conditions, which is why they earned the right to be featured as Montana’s February Harvest of the Month ingredient. They also pair well with last month’s featured crop, lentils.

Students learned in January about the important role lentils play in charging soil with nitrogen, a key element for ensuring strong crops, and one that is sapped from soil by growing plants. When used as a rotational crop, lentils recharge the soil with nitrogen, and beets are a particularly nitrogen-hungry plant. They grow the best when planted in a field where lentils or other legumes have been previously grown, where they can find the high-nitrogen soil they need.

And while they may not be one of Montana’s more famous crops, beets have been on the rise as an agricultural staple in recent years. Sugar beet farmers in the eastern part of the state saw record bumper crops in 2017, when a million of tons of beets were harvested and processed in sugar beet factories around the state, reported the Billings Gazette. That year, after harvesting ended in late October, those beet factories were working into March turning them into sugar. It’s a large puzzle piece in the state economy, generating around $100 million annually.

Hearty beets are rich in potassium, vitamin A and magnesium. Some studies show they can help lower blood pressure and reduce the risk of heart disease, and the natural nitrites in beets even suggest they can help improve athletic performance by boosting blood flow. They can even be juiced and sipped as a post-workout recovery drink.

In honor of Valentine’s Day, Ennis fifth-graders made Heart Beet ravioli, beginning by roasing the beets and removing the skins. The cooked beets were then blended with ricotta cheese, spices and an egg, then wrapped in wonton wrappers, boiled like normal pasta and sautéed with butter. The pasta packets were even festively cut into heart shapes.

Montana Harvest of the Month is a Montana State University-run program developed by the university’s Food and Health lab. The program provides teachers around the state with monthly recipes and curriculum to help bring the outdoors inside and educate students about Montana’s agriculture and the power of eating locally-grown foods.