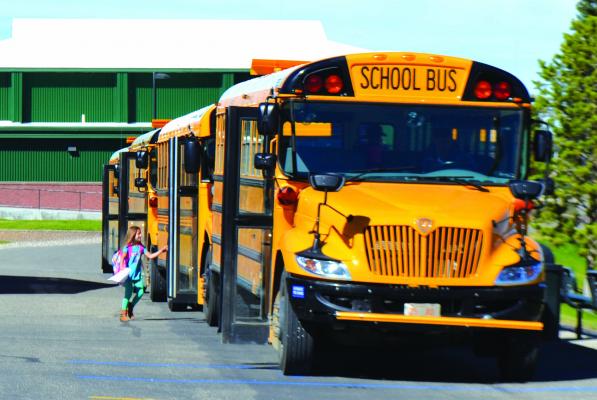 Gail Banks has been driving school buses in the county for nearly 32 years and says that all the schools through the Madison and Ruby valleys face an ongoing problem when drivers do not stop for the flashing red lights on buses.

“I hear on my bus radio all the time about people running reds and nearly hitting kids,” says Banks. “It’s so hard for a driver to watch kids so they don’t get hit and get a car’s license plate at the same time. So many people just break the law and go on their way.”

It’s been a problem in Madison County for years. State law requires that drivers stop at least 30 feet from a bus when its red signal is flashing, regardless of which direction the car is approaching from.

This code was updated in 2013 after a bill from Governor Steve Bullock increased the stopping distance from 15 feet. Drivers are required to remain stopped until students have either boarded their bus or safely reached the side of the road.

But what many drivers miss is that they also must wait until the bus has shut off its red signals, regardless of where students are.

School buses also have amber-colored flashers, which require a driver to slow to a reasonable speed and be prepared to stop.

Many students have to cross the road after alighting from their school bus, but the size of the bus means that drivers in nearby cars can’t see around it. Drivers assuming there are no children behind a bus has led to countless near misses, many of which Banks has personally witnessed.

“It’s the students who are really at risk,” she says. “The close calls are way too many. I have had semi-trucks pass my bus and nearly hit students already off the bus getting ready to walk across the lane.

“They could have killed those children just being in too big of a hurry to stop.”

Sheridan superintendent Mike Wetherbee says one way to keep students as safe as possible is to place school bus stops at places where they won’t have to cross the street to board.

“We try as well as we can to pick students up on the door side of the street,” says Wetherbee. “That’s one of our policies. There’s a ton of thoughts about safety there.”

Wetherbee says that when a car illegally passes a school bus, the district’s policy is to call Montana Highway Patrol or the sheriff’s department. But the biggest problem is a lack of patience by drivers.

“We live in an impatient world,” he says. “But the fact is, it only takes a few seconds to stop and make sure the kids are safe, and then get on your way.”

The only instance in which a driver does not have to stop for a school bus is when the bus is on a completely separate roadway, or a roadway that students can’t cross such as a controlled-access highway or interstate.

Anytime cars and school buses find themselves sharing the road, drivers always need to take extra caution. If they don’t the results could be tragic.

“Some people just aren’t paying attention,” says Banks. “Our luck will run out one day, and a child is going to get hit.”