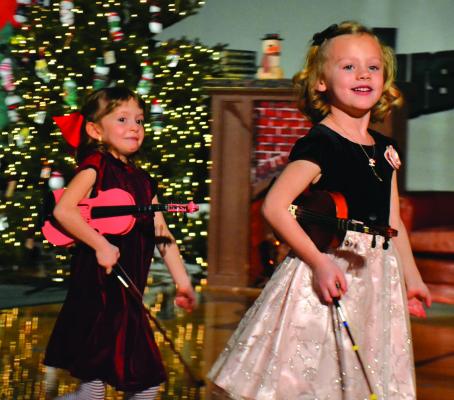 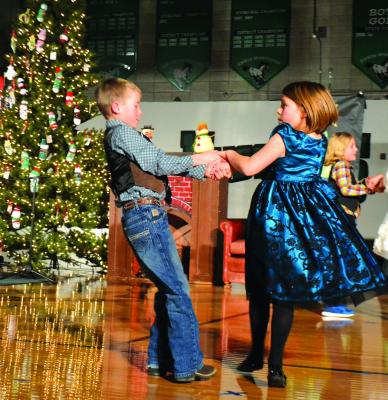 ENNIS – The gym at Ennis High School was packed to bursting on Monday evening, December 17, for Ennis Elementary’s annual Christmas program. The stockings were hung with care by a festive flickering fireplace – though electric, just in case – and towering trees were hung with ornaments handmade by the performers themselves, who stood on risers before a backdrop complete with paper cutout renderings of the Madison Theatre and Ennis Pharmacy along downtown’s Main Street.

Joining the elementary school performance for the first time this year was the Ennis Community Children’s School class of preschoolers, who kicked off the evening with a classic, “Jingle Bells,” before adding a dance to the lesser known “Christmas Island,” influenced by the recent home of dance instructor Ashton Olson, who moved with her family from Hawai’i.

Each grade level had their own performance featuring two or three holiday favorites, all tied together by a recitation of the Christmas story “The Snowman,” divided among representatives from each class.

There were many classic carols performed, from “The Christmas Song,” to “Deck the Halls,” and some that may not have been as familiar: Patapan, a French Christmas carol dating back to the eighteenth century, and “Walking in the Air,” from the film adaptation of “The Snowman.” Olson created choreography for each grade level, from the hula-inspired “Christmas Island,” to a swing-dancing “Baby, It’s Cold Outside.”

Music and piano teacher Vickey Gordon accompanied the younger classes, while Ennis music teacher Andrew Scruggs played for the older students, until the fifth-grade band finished up the evening. Also making a special appearance was David Walker, a native of England who has played with the likes of Fleetwood Mac and Savoy Brown over his long and storied career in music. Walker joined the second graders for a rendition of Leonard Cohen’s “Hallelujah,” which was one of the performance’s biggest hits.

With not a spare seat in the whole gym, students received a rousing round of applause after each rendition, but there was one more surprise before the evening was over. Santa made a special last-minute appearance before jetting off to make some special deliveries on Christmas Eve, handing out treats to the young performers.