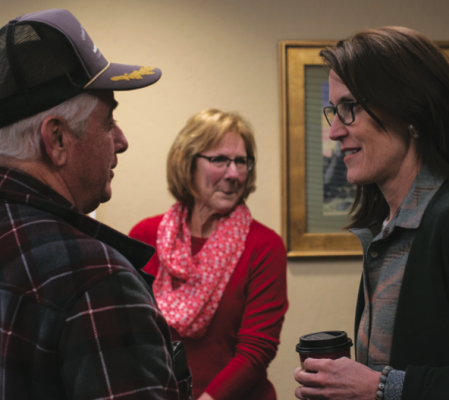 Williams is one of two Democrats running for governor in Montana’s 2020 elections. If elected to be the Democratic candidate in the primaries, Williams will go against one of the three Republicans for the governor seat.

“My parents are my biggest heroes,” Williams said.

She grew up in Helena, spending a few years as a child in Washington D.C. when her parent’s careers demanded it. The big city was an exciting adventure for Williams, but she noticed that the people did not wave.

“My mother kept saying, ‘just keep waving, just keep waving. We’ll spread Montana wherever we can.’ We got to keep that value set here,” Williams said.

Williams majored in Political Science, Forestry and Native American Studies at the University of Montana. She founded williamsworks,
a company that works alongside Fortune 500 companies and charities to create strategic impacts for the better of a community. Their clients include Gatorade, Nike Foundation, (RED), Shultz Family Foundation, Equal Justice Initiative and many more.

Her entrance into the pollical arena was in response to the 2016 election. It was a careful decision, which she collected data and polls to assure it was a sensible option. “There are some real problems in our country that I didn’t know about,” Williams said.

“When 41% of Montanans are deciding between putting food on the table and prescriptions, we have a crisis,” Williams said.

According to American Association of Retired People, 39% of Montanans stoppedtaking a prescribed prescription drug because it was too expensive in 2017. Prescription prices continue to climb.

The 2019 federal budget request for the United States Department of Health and Human Services is about $17.9 billion short of the 2017 level. The requested $68.4 billion goes toward health issues like combating the opioid crisis, increases budgets for the Criminal Justice and Juvenile Justice programs and creates funding for a new Assertive Community Treatment for Individuals with serious mental illness. The request reduced funding for the Substance Abuse and Mental Health Services Administration’s Mental Health and Substance Abuse Treatment Programs of Regional and National Significance by about $600 million.

“Budgets are reflections of our values,” Williams said. “We decide what we want to fund and who we want to be as Montanans. If nothing else, in this state we take care of each other, we’re good neighbors. You never see one car on the side of the road you see two.”

“We need a creative solution,” Gockel said. Williams looks at wealthy out-of-staters and property taxes as leading drivers of the exceeding housing costs in Montana. “Montana is a welcoming place,” Williams said. “We want people to participate in our economy.”
According to Williams, there are a number of strategies that can infiltrate the housing problem. She referred to examples across the state like Helena’s 85-unit affordable housing complex, which broke ground in the fall of 2018. “I believe government can and should do more for the public,” Williams said.

“We all know that moving lands to the state is really just a selling to the highest bidder,” Williams said.

Williams grew up recreating with her family in the Big Hole. Public lands are a part of her identify as a Montanan, as with most Montanans. Williams believes public lands are essential to Montana’s identity, heritage and economic wellbeing.

“I want to make sure Montana stays Montana,” Williams said.

The Gravelly Mountains had an active grizzly bear presence over in 2018.

The Yellowstone Grizzly Bear is returning to its historic distribution across Montana’s wilderness and at times, in popular recreation areas. Whether for or against the delisting of the YGB from the Endangered Species List, the conversation is in Madison County’s backyard.

Williams supports returning the management of the Yellowstone Grizzly Bear to the states. She trusts the science, scientists and biologists to make the right decision.

“Critters big and small are part of where we are,” Williams said. “We have to be thoughtful about what that management looks like.”

Gov. Steve Bullock formed the Grizzly Bear Advisory Council, which is a multi-perspective, 12-member board. The council has a year to listen, learn and recommend a management plan for the Yellowstone Grizzly Bear.

According to Williams, Montanans are problem solvers and listening to one’s neighbor could lead to solutions and understanding that Helena was not able to produce.