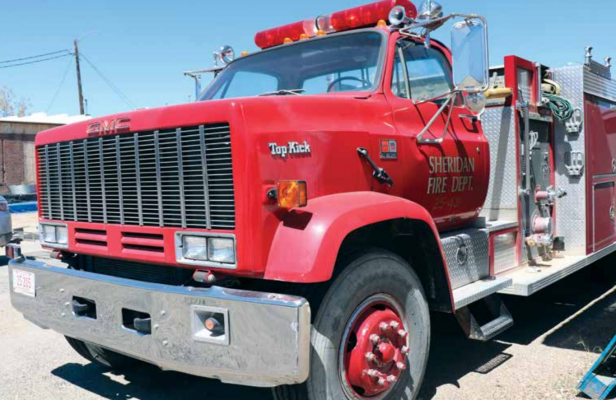 When our powers combine

Sometimes, size does matter. For the Sheridan Fire Department, that boils down to the size of its station: the department’s firefighting equipment can barely fit inside the aging building. Just backing into the station is a feat in and of itself. It’s gotten to the point that something needs to be done about the tight quarters.

As luck would have it, Sheridan’s Rural Fire Department might have just what the town department needs – land and a spot for a future brand-new fire station. The land, fully paid for via fundraisers and donations a decade ago, is located just out of town and is currently used as a training facility.

“It’s also a better spot to respond and take care of equipment,” explained Madison County’s Director of Disaster and Emergency Services, Joe Brummell. “Maintenance, training, everything about it would be an up and up.”

To officially join forces, the departments would combine all their assets into a lump sum for ease of accounting. Before that can happen, though, it would become a ballot initiative for both town and rural Sheridan residents to vote upon.

The bad part, said Brummel, is that the Sheridan Rural Fire department and its board have the lowest mill in all of Madison County, with an operating budget of $20,000, if that. “You can’t buy anything new with that, maybe some training, some gear or maintenance, and that’s about it.”

The Sheridan Fire Department is funded roughly 50/50 from city assessments and rural fire mills from the fire district.

A lot of other towns, said Brummell, have gone through this process in one shape or form, including Ennis in 2008, with the town paying a specific flat fee to provide coverage while rural areas are covered by taxes from mill levies. Columbus has also provided input in their transition plan.

The new building will be located outside of the city limits, “so we are trying to figure out how to do this fairly,” said Sheridan Rural Fire Board Chairman Del Bieroth. “Whether to contract with the city so the city assessments so they don’t go up any more, or reduce the city assessments the same amount as the rural fire mills. It’s a little complicated, but we’re trying to ward off any problems by getting started on this early.”

Involved parties are reaching out to other Montana communities who have combined to see how they do things. They also plan to do community outreach on their plans. “We want to figure out what’s the easiest and most beneficial for the community,” said Bieroth, “So when we do break ground and get a building it’s a smooth transition with the rural fire board as well as the city council.”

The rural department’s goal is to have the new station’s groundbreaking in a year, “They’re a long ways from that,” said Bieroth. “The building costs are so unpredictable right now, so it’s hard to fundraise not knowing what it’s going to cost.”

Fundraising for the new building is being done by the Sheridan Fire Association. They hope to raise enough money to build the building and turn the keys over to the rural fire board. It’s just the initial phase of the fundraising process, as it’s difficult to get a reasonable estimate due to the skyrocketing and fluctuating material costs at the moment. A best guess is $3.1 million.

Bieroth believes community outreach and education will be essential in the process, as it’s possible Sheridan town residents don’t even realize they’re paying for fire services. There’s no specific line item and the money comes out of the town’s general funds.

“We want to make it clear we are not going to raise their taxes by building this fire station,” said Bieroth, noting there is a chance down the road mills may need to be raised.

Bieroth also thinks it will be important to educate the Sheridan community as to what the fire department really does – it’s not just putting wet on hot, as he told the Madison County Commissioners last week when they met to discuss their plans.

“It’s more than just putting out fires, it’s traffic control on an accident, it’s fire alarms, it’s smoke detectors, it’s gas leaks, it’s power lines down,” Bieroth listed. “We just want to get the information out there so people understand what we’re doing.”