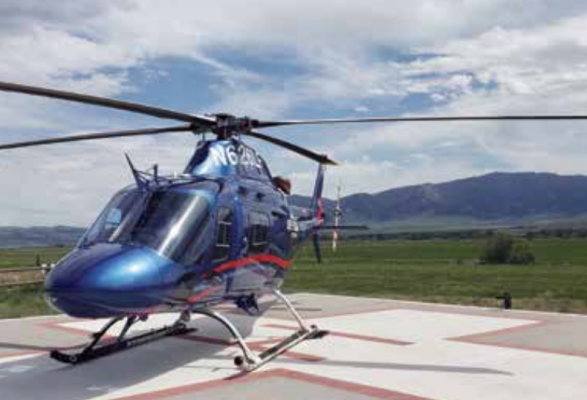 When every second counts

When someone is suffering from a heart attack or stroke, every second counts. Each moment lost in transit or diagnosis can cost a life. With that in mind, Life Flight and Madison Valley Medical Center teamed up for a first-of-a-kind in Montana certification to rapidly load patients on a helicopter as if their lives are counting on it, because of course, they truly are.

If you were hanging around Ennis on the afternoon of June 8 you may have noticed a helicopter buzzing around town. No, it wasn’t a crazed pilot making hot laps in their new heli – it was the Life Flight “hot load” training session put on for the MVMC’s EMT and nursing staff.

A hot load is an instance where EMTs and nurses can transport a ready-to-go patient directly into a running helicopter, blades spinning, set for an immediate takeoff. The focus of the training was on patients suffering from STEMI heart attacks – a time is of the essence condition which requires small medical centers to send the patient to the nearest hospital that can handle it – in this case Bozeman Deaconess.

Life Flight Paramedic and Customer Service Manager Steve Schmid and his team provided the time-sensitive training. He said the collaboration with MVMC was a Life Flight initiative to highlight and improve time-sensitive emergency procedures at rural hospitals.

“Just because you choose to live or choose to recreate in an area with a rural facility, doesn’t mean you shouldn’t have that capability to be able to get to what’s needed at the bigger centers,” said Schmid. “That’s where collectively we work together.”

MVMC was an excellent place to do this training, said Schmid, noting the community’s nature and the reality that every second lost during a heart attack means potentially lost heart function as well.

Timing was of the essence for the collaboration as well, said Madison Valley Medical Center’s Nurse Education and Trauma Coordinator Jillian Acosta. The center recently absorbed the community’s ambulance service, and now, EMTs can do EKGs in the field. If a potentially fatal heart attack is identified during the transport, the EGK is transmitted to MVMC, interventions are prepared, and Life Flight can be on its way and potentially even on site in Ennis before the patient even arrives at the hospital.

“Then, it’s just load and go,” said Acosta, explaining that the goal for heart attacks is 90 minutes between arrival at the hospital to having the patient on the table in the catheterization lab getting treatment. “It’s doable, which is pretty impressive because we are so remote, but it really is possible.”

Ennis’ closest cath lab is in Bozeman, “So the less time you spend getting there, the better for the patient,” said Acosta, who said the plan is to apply the expedited transport procedure to other time-sensitive emergencies like strokes and major trauma. “So now we have the hot load training, and we can make the trip between the patients’ home and Bozeman as short as physically possible.”

The rapid response falls on everyone involved, said Schmid, from the patient not delaying seeking care, to ambulance response, diagnosis, initial calls to Life Flight, and ultimately getting the patient on the running helicopter and in the air to higher care.

“It affects not only their survival, but also their quality of life,” said Schmid, likening emergency response to providing a bridge to care – the goal is to lessen one’s time crossing the bridge. “Quality is very important when it comes to life. You could save somebody, but then their cardiac function is minimal, they can’t play with their grandkids, work on the ranch, do the things they normally do because their heart is just beyond that repair. And that’s where those minutes, those seconds, really come into play.”

Schmid commended MVMC for its dedication to becoming Montana’s first authorized hot load facility, providing a service which is a standard in Life Flight’s other coverage areas throughout Washington, Oregon and Idaho.

“We hope to show that rural facilities can really do this,” said Schmid, hoping to use MVMC as a flagship to show other rural Montana communities what can be accomplished. “To me it shows forward thinking, and it shows a compassion for the community that they have.”

While emergency flights aren’t everyday occurrences at the MVMC, they aren’t uncommon. MVMC Chief Nursing Officer Allison Treloar said year-to-date the center has averaged about two Life Flights per month. According to Schmid, in a normal scenario, Life Flight can make it to MVMC in 20 to 25 minutes.