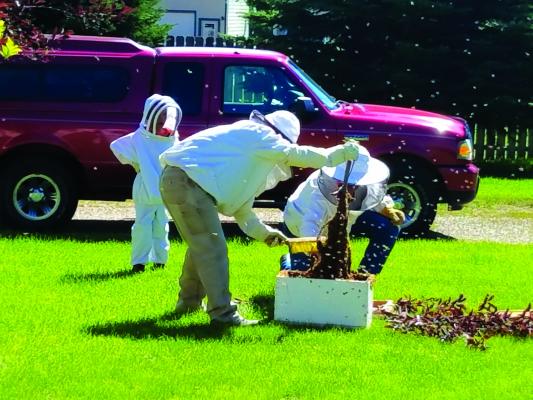 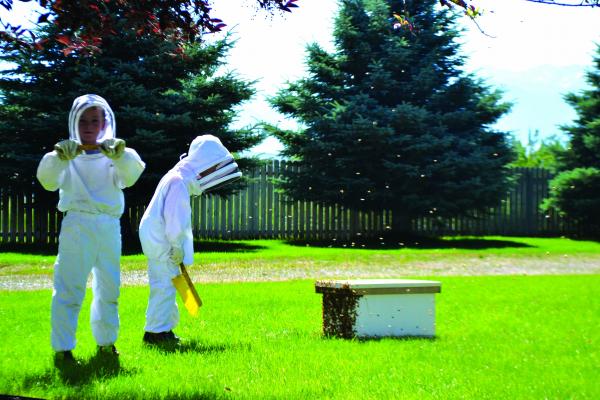 ENNIS—When Esther Warburton left her home to run some errands on Thursday, July 12, there wasn’t a bee in sight.

By later that afternoon, a huge hive had built itself in the tree in her front yard.

“When I left I didn’t hear a thing,” she says. “And when I came back a couple hours later, the whole tree was buzzing.”

Throughout the afternoon, she watched as the hive expanded, and by Friday morning, the thing was “solid,” she says, holding her hands about a foot apart. So, she called Brian Stoner, owner of Montana Wildlife Control Services, who came down from Belgrade. Warburton wasn’t sure whether the hive contained wasps, hornets or innocent honey bees, and didn’t want to take any chances.

“Had it been hornets or wasps, I would have had to come in and spray, and dispatch them,” says Stoner. “But with honey bees, we would just try to move them, since they’re in so much trouble already.”

As it turns out, it was honey bees inside the hive. With global honey bee populations suffering due to abnormalities like colony collapse disorder, and because of their important role as pollinators, Warburton and Stoner agreed they didn’t want to hurt the bees if they didn’t have to.

So, Stoner donned his bee suit and, with the help of Warburton’s neighbor Lindsey Grayden and Grayden’s sons Collin and Finn, cut off a limb of the tree and scooped the bees into a hive box. Grayden then took the box to a friend of hers who keeps bees, whose hive had been decimated by last winter’s cold weather.

Everyone got a happy ending, including the bees. Ennis got quite the Friday buzz, but nobody involved got so much as a single sting.