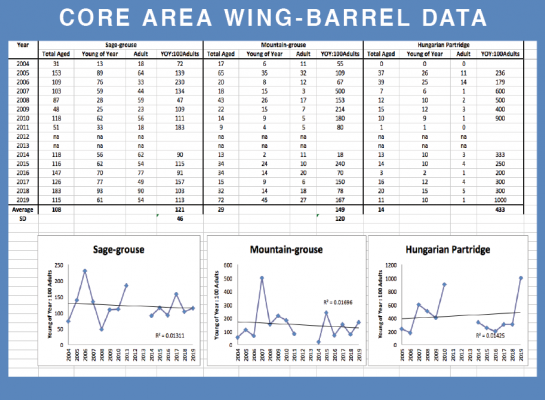 Average to above average results

Sage-grouse and mountain-grouse habitats and populations are in good condition, according to Montana Fish, Wildlife & Parks’ annual wing collection.

Sage-grouse production was a little less than average, and it was an above average year for mountain-grouse production. Hungarian Partridge wings were also collected but because of their small sample size in southwestern Montana, it is difficult to track their production rate.

FWP asked hunters to drop one wing from harvested sage-grouse, mountain-grouse and Hungarian Partridge in 15 barrels stationed across southwest Montana. From a wing, wildlife biologists can indicate species and whether the bird is an adult or young-of the-year. The juvenile to adult bird ratio helps wildlife biologists better understand annual and trend production of each species.

“I think that downward trend is a short-term trend driven by hard weather conditions,” Waltee said.

FWP conducts another field study in spring to judge the health of upland gamebirds’ habitat and populations. During breeding season in April and May, FWP counts how many males are present in several known breeding lands.

Spring weather conditions affect chick production the most. Dry and relatively warmer conditions are favorable for nesting. The snowy, freezing spring of 2018 affected reproduction rates because the eggs were not likely to survive the conditions.

Several years in a row of hard weather in the spring can severely impact upland gamebird populations. The late 1980s – early 2000s saw an extended drought in southwestern Montana, which caused the population to steadily decline. But since FWP began monitoring upland gamebirds in 1964, there has been growth overall.

“Upland gamebird production and reproduction is highly influenced by weather conditions,” Waltee said. “When monitoring habitat or population we look at the long-term trend.”