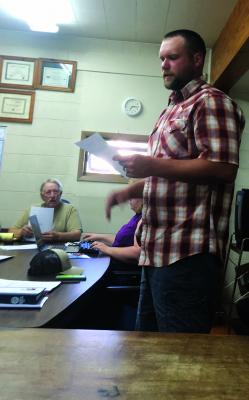 Scott Holbrook was installed as a new council member. Holbrook took Annette McLean’s seat on the council. McLean resigned from council in June.

Puckett told the council that the fairgrounds water issue had been resolved thanks to a returned well water test from the state’s Department of Natural Resources and Conservation (DNRC).

At the June meeting, Puckett told the council that if water tests from an abandoned well on the fairgrounds property returned with positive results, the fairgrounds could use this water for a livestock water source and to flush restroom toilets. The usual fairgrounds water supply line – it ran under the Beaverhead River – had failed, due to the stress of floodwaters from snowpack runoff and spring rains, and was no longer useable.

Puckett said the fairgrounds intended to use this via temporary, above ground, ¾-inch hose connections. This would stay within the parameters of DCNR’s rules for temporary uses.

Councilman Matt Greemore asked about the capacity of the well.

“There will be nothing running constantly,” Puckett said. “At peak use, there won’t be a lot of pressure and there could be a rotating service, but the good news we have water.”

In a related item, the Fair Board in June asked council to remove a water meter in Riverside Park and bill all the water going to the fairgrounds and the park under a single metered reading, paid for by the county.

Greemore was against this. He said the town’s water system was based on the number of users involved, and dependent upon the number of meters connected to the water system. If the council were to remove one water meter, others also would request to have water meters removed – just that evening another request for two homes to be monitored under a single meter instead of two meters was presented to council.

Greemore said that when the water system was installed, he and McLean squinched the numbers on the cost of water down as far as they could, spreading these costs out among users via the number of meters involved.

Greemore explained that pulling a meter out would increase the cost of water to users across the system – everyone would pay a little more as a result of a meter being removed.

Initially, Holbrook was against this, but after Greemore’s explanation, he’d changed his mind.

The council also visited with two representatives of the Twin Bridges school board on the proposed 6th Avenue sidewalk, curb and storm water runoff collection project.

The town would like to install a town-wide curbing, sidewalk and a storm water collection system, to prevent ponding on city streets and other areas when heavy rains or melting snow sticks around.

The town is looking at acquiring state money for this $1.5 million effort.

The initial proposal for this would begin at 6th Ave., and since the school is the biggest landowner along this stretch of the proposed project, the school board’s approval would determine where the town might start the effort.

If the school board approves, the project is a big one, with construction starting in the spring of 2019, according to Mayor Tom Hyndman. The town’s share of the project would be $45,000. The state Department of Transportation (MDT) would cover the lion’s share, and the school would need to cover some of the project as well.

If the school board doesn’t approve of the plans, then the town would begin a smaller, phased out project.

The board meets July 17.

Hoyt and Patty Walker returned to the council for the third month in a row to again argue their position on the disputed fence between their property and Four Rivers Fishing Company’s property.

The fence has been a bone of contention between the Walkers and Four Rivers since it was installed earlier this year.

The Walkers told council they want the town’s fence ordinances enforced, saying the fence is still not in compliance with town rules because the portions of it still standing are too high, and it is still is on their property – this despite portions of the fence being chain-sawed down after the Walkers had a survey of property boundaries done which showed the fence was on their property.

Four Rivers disputed this survey and vowed to have a survey of their own done.

Council has not received a copy of either survey, and the disagreement has gone into the court system.

Greemore told the Walkers that the council was still waiting on advice from the town’s attorney, to see if the town’s fence ordinances read the way the Walker’s see it, or the way Four Rivers sees it.

Patty Walker told the council she was “done” with them, and said council could visit her to see the survey, but she wouldn’t bring the survey to them.

At the end of the meeting, one resident asked the council resolve the Walker – Four Rivers fence issue, to get it finished before someone has a heart attack over it.