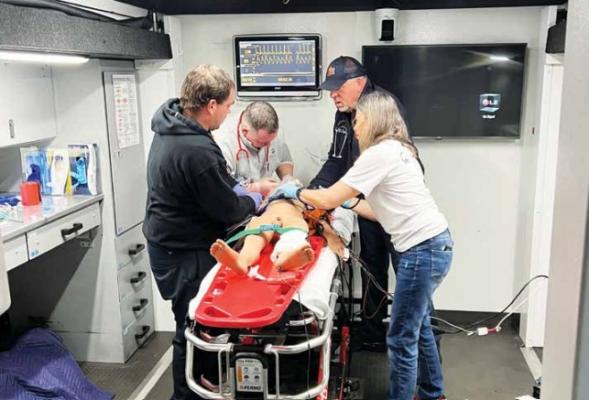 Training for the real deal

Simulation In Motion (SIM)-Montana is a nonprofit organization that specializes in training medical workers with the use of high fidelity manikins. SIM-Montana travels around the state in their mobile medical lab to train employees at hospitals in rural towns.

The group hosted training sessions all throughout the day on Friday and Saturday. Each session came with a new mix of medical professionals, each one with a different experience level than the other. Some participants had worked as first responders for over a decade, while some were only a few months into their training.

SIM-Montana uses high fidelity manikins to simulate its realistic medical scenarios. According to a SIM-Montana press release, the manikins exemplify numerous human-like characteristics such as breathing, change in breath patterns, bleeding, pulse changes, as well as the ability to speak and cry. They are programmed to respond to their surroundings and to treatment in both a verbal and physical way. This allows for very realistic training.

The training sessions this time around had a focus on Emergency Medical Services (EMS). Each team worked through numerous traumatic situations. One of the scenarios entailed aiding a 7-year-old boy who had been traumatically injured while riding his bike. The group was tasked with identifying the problem in a real time situation and providing proper medical care.

After the scenario was finished, each group debriefed with the SIM-Montana team to discuss their performance. The group discussed what they did well, what could be improved upon and what role they each played. The debriefing session allowed each individual to think through their process and learn from each session.

SIM-Montana was originally founded in 2016, however is under new management as of last year. According to a SIM-Montana press release, the nonprofit group aims to improve patient outcomes, reduce medical errors and increase team performance as a result of the training.

They focus specifically on low frequency, high intensity situations for their training scenarios. These situations are not something that happen often in rural towns. However, the importance of proper and swift medical care in those scenarios cannot be overstated.

“These situations don’t happen that often, but when they do, it’s imperative that these little communities are prepared for those kinds of emergencies,” SIM-Montana Team Leader Levi Meyer said.

Meyer believes that these individuals in rural towns have the proper medical skills, but they need to be consistently updated.

“They have the skills and they have the training through their education, but since these are perishable kinds of skills that need to be constantly refreshed,” Meyer said.

The two day event would not have been possible without sponsorship from Ressler Motors in Bozeman.

“I really want to thank Ressler Motors for putting on a great event,” Rohrback said.