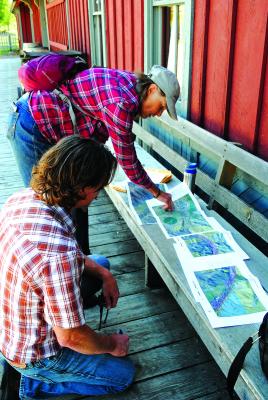 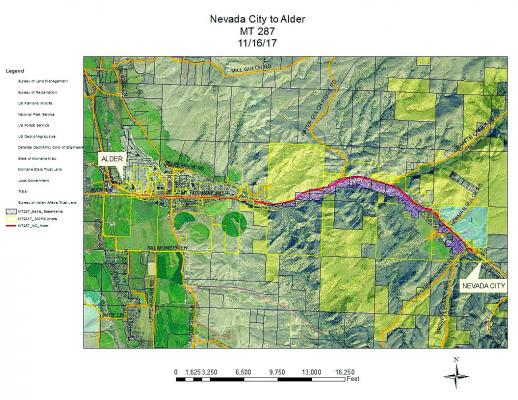 A trail to connect Nevada City and Alder?

Effort being worked on could be economic development tool

NEVADA CITY – On Friday afternoon, June 22, Andy Thomas and Darlene Tussing stood at the Nevada City train station staring down at three large maps laid out on the bench in front of the station.

The maps contain an idea they share for a public multi-use trail that would connect Nevada City and Alder.

Currently, there is such a trail from Virginia City to Nevada City. Thomas and Tussing would like to see that trail reach Alder, 8 miles further down the valley. Trouble is, they’re running up against a ticking five-year time clock and a choice between routes for the trail, depending on what is chosen, that could get very costly.

The idea to extend the trail from Nevada City down into Alder began in 2015, with some thinking about Montana’s rails-to-trails programs, Thomas said,

“My idea was to have a bicycle trail from Alder to Twin Bridges, “ Thomas, a physical therapist and athletic trainer for Madison Valley Medical Center, said. “I thought this would be do-able, so I started talking with Darlene, who had experience getting other trails going.”

Between Thomas and Tussing, the idea for an Alder to Twin Bridges trail got shortened to a more attainable goal, with the focus on extending the existing Virginia City to Nevada City trail from Brown’s Gulch in Nevada City to Alder.

Building a trail like this is no small undertaking.

First comes the easement for the trail across property that is owned by a number of entities, including private landowners, state and federal entities. Then comes the finding the money and materials to actually build the trail.

In their quest to acquire easements and access for the trail, in 2016, Thomas and Tussing discovered that one of the six private landowners who owned property along the Alder Creek valley between Nevada City and Alder, Hart Baitis, was willing to grant an easement for a 20-foot trail corridor – a 10-foot wide trail, with two 5-foot maintenance sections on each side of it which would be in place as he sells the parcels – provided that two things happened:

•  One thing was that the trail would be actually be built.

• The other was that the trail would be completed within five years.

One logical place to put the trail was parallel to Montana Hwy 287, because the Alder Creek valley is not especially wide in many places.

Initially, both Thomas and Tussing said, the Montana Department of Transportation (MDT) was receptive to using the highway’s wide right-of-way to site the trail. Such a trail paralleling the highway could keep both motorists and bicyclists out of harms way.

Tussing, Thomas and others interested in creating the trail worked on this angle.

However, in late 2017, MDT rules governing right-of-ways changed, and MDT didn’t want the trail in the right-of-way – unless it served as a “commuter route for larger cities and meets other criteria that they put in place,” Tussing said. Also, numerous “tight stipulations” from MDT would require a lot of money to build the trail: For example, MDT requires a hard-surfaced trail. Tussing and Thomas applied for a Montana Fish and Wildlife Conservation Trust Fund, but were not selected because this funding is focused on creating wildlife habitat and fishing access sites.

This setback hasn’t wilted the ardor of either Tussing or Thomas for the trail.

Both remain hopeful that the trail can be built under the five-year deadline, that both easements and right-of-way use can be accomplished.

In addition to Baitis, both Tussing and Thomas said, state and federal land had to be crossed, and officials from both the federal Bureau of Land Management and state school lands were supportive of the efforts to create the trail, but would require abiding by their regulations. Also, several landowners along the route are fairly supportive of the effort.

Tussing pointed to the TransAmerica Bicycle Trail Route. Begun in 1973 and opened during the 1976 US Bicentennial, the trail, which follows the highway corridor was designed to be a cross-county bicycle route. In 1976, 4,000 cyclists showed up for the “Bikecentennial” ride.

Today, part of this trail runs from Missoula to West Yellowstone, right through Alder, Virginia City, Ennis and other Madison County locales. It is included in the Adventure Cycling Association’s array of rides. This organization is one of the premier bicycle touring groups in the nation, offering many rides in scenic areas of the country.

Tussing has worked to establish bicycle trails in Billings, she said, where she participated in creating that city’s 36 miles of hard-surfaced trails used by bicyclists, joggers, walkers and others, along with 17 miles of bike-specific lanes.

While the costs of building trails are steep, the value they bring to communities is great, she said.

In Billings the cost of building a hard surfaced, private land bicycle-worthy trail would amount to about $350,000 per mile, Tussing said. Ennis’s concrete public trail through town cost about $380,000 Tussing said, although Thomas said this was more a sidewalk than a specific trail.

Grants, private donations, citizen support and other vehicles might help facilitate this effort, both Tussing and Thomas said.

Both Tussing and Thomas said these costs could easily be offset by the benefits of simply having a trail in the area.

Tussing said the trail could expand tourism from a seasonal effort to year-round thing. Tourist season is primarily May through September, she said. A trail would appeal to bicyclists in spring and fall, two favorite times to ride. It could also appeal to cross-country skiers, and other users – horse riders, walkers, joggers, etc.

A bicycle trail could be an alternative route for the commuters coming to Virginia City to work at the town’s many businesses and the county offices.

Thomas remained buoyed by support for the trail from business and government officials.

He said in talks with the county commissioners, they were keen on the idea of a trail. Their main concern was if the trail would become a maintenance issue.

The Montana Heritage Commission was also supportive of the idea of the trail as part of a scenic byways program, he said.

Tussing thought linking a Nevada City to Alder trail to other state trails would be a good idea. She talked about the Vigilante Trail, a Twin Bridges to Alder route that would make a logical connection some day.

Thomas talked about acquiring grants and other funding for trail building, also how the trail could offer some fishing access.

Working with a trail that could be funded through a federal Transportation Alternate (TA) grant is a possibility, although this option would require a hard surface trail which would escalate the cost, according to Tussing. MDT administers TA funding and will not consider a grant if the trail is considered recreational, although there is funding through the Recreational Trails Program administered by Montana Fish, Wildlife and Parks. The federal Highway Administration authorizes funding for such projects that are defined as transportation alternatives, including on- and off-road pedestrian and bicycle facilities, infrastructure projects for improving non-driver access to public transportation and enhanced mobility, community improvement activities such as historic preservation and vegetation management, and environmental mitigation related to stormwater and habitat connectivity; recreational trail projects; safe routes to school projects; and projects for planning, designing, or constructing boulevards and other roadways largely in the right-of-way of former divided highways.

Currently, according to the Rails-to-Trails Conservancy, Montana has a total of 19 rail-trails – many created using Transportation Alternative monies – totaling 228 miles. Another eight projects are current, adding another 75 miles of trails to this total. These trails cost a total of $3.3 million, yet they add much to local economies.

If anyone can accomplish the vision of a trail connecting Nevada City to Alder, it will surely be Tussing and Thomas.

“This is a good opportunity,” said Thomas. “All we have to do is connect the dots to finish the corridor.”